Amanpour, CNN Analysts Rip Obama on ISIS: 'The Strategy Is Not Working' 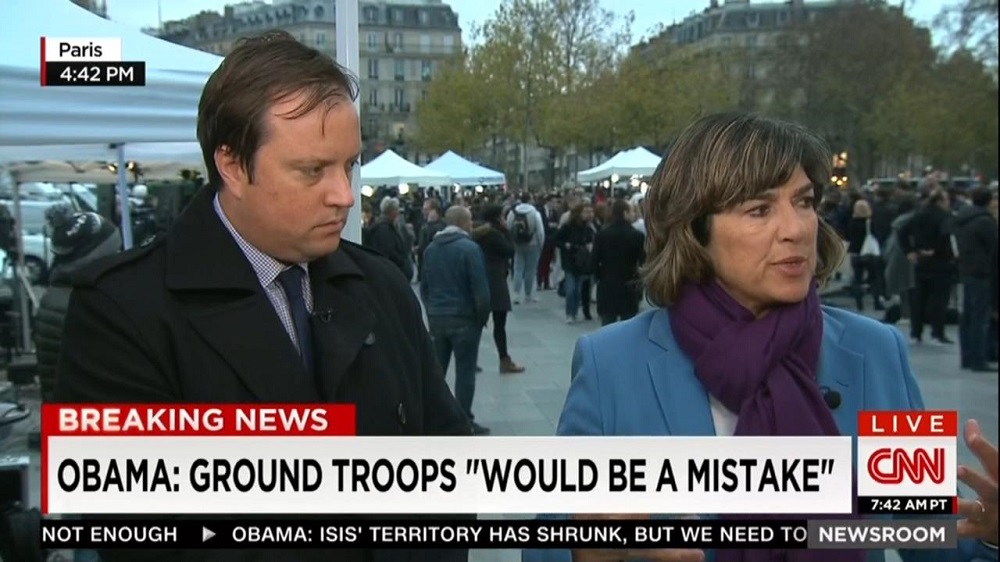 On Monday, CNN's Christiane Amanpour and two of her network's analysts blasted President Obama moments after he ended a press conference where he defended his anti-ISIS strategy. Amanpour underlined that Obama "something that was pretty incredible...that our strategy is working. People do not believe that to be the case. The only strategy that's working is the strategy that he tends to dismiss — and that's the ground troop strategy. Sinjar, Tikrit, Kobani — those are the only ISIS strongholds that have been taken back by a combination of American intelligence and air power, and local ground forces." [video below]

The journalist later asserted that "the question is to have an honest conversation now about a new strategy to destroy." CNN terrorism analyst Paul Cruickshank added that "clearly, the strategy is not working, because of the terrible terrorism we've seen," and bluntly stated that "the idea that you can really contain a terrorist group doesn't really make sense." Political analyst Gloria Borger contended that the President's "problem is that he has to be able to tell Americans, who may be worried — and tell the world why his strategy is going to work, when they've seen that it isn't working, given what occurred in Paris."

Anderson Cooper, who was anchoring CNN's special coverage of the terrorist attacks in Paris, first turned to Amanpour for her take on the chief executive's remarks: "Christiane, lets start with you: a very — at times, defensive President Obama." The CNN journalist replied by launching her terse assessment of the press conference. Cooper replied to Amanpour by running to Obama's defense, but she interjected with her "honest conversation" line about the President's strategy on ISIS:

CHRISTIANE AMANPOUR: Well, if anybody was expecting to hear in the — in the passion and eloquence and — and speech patterns of President Obama a tipping point — they did not hear that today — and, as you say, defensive when he was asked questions about American leadership; dismissing the notions of American leadership as mere slogans — seeming not to take into account the very palpable fear among citizens — certainly, here in France; to an extent, in the United States; certainly, in the United Kingdom — everybody bracing for the worst of the worst to happen again.

He said something that was pretty incredible — according to many of the military experts here and around the world who I've spoken to — that our strategy is working. People do not believe that to be the case. The only strategy that's working is the strategy that he tends to dismiss — and that's the ground troop strategy. Sinjar, Tikrit, Kobani — those are the only ISIS strongholds that have been taken back by a combination of American intelligence and air power, and local ground forces — whether they're Iranian-backed militias in Tikrit; whether they're Kurdish Peshmerga and other Kurdish forces in Sinjar and in Kobani. This is a fact.

He's saying that ISIS is contained. This also is — is not actually true. ISIS is not contained, because ISIS attacked a Russian plane; attacked Beirut; and has now attacked here [in Paris]. And military strategists say that the length of time between the ISIS attack on Charlie Hebdo — and the al Qaeda, of course, — Charlie Hebdo and the HyperCacher market, and here — ten months is strategically insignificant. That is no time at all. That means they are not contained.

COOPER: In terms of containment, though, he is trying to stress — and whether it's walking back comments he made before — he's really, in this, was stressing geographic containment on the ground, compared to, the same time last year—

AMANPOUR: Fine. But in terms of ability, they are not contained. They have just slaughtered 129 people in Paris—

AMANPOUR: The death toll may rise very higher, because there are 352 people injured — of whom, 99 are critically wounded. So the question is to have an honest conversation now about a new strategy to destroy.

About 20 minutes earlier, CNN correspondent Jim Acosta confronted Obama over his claim during the press conference that he "had not underestimated ISIS's abilities." Acosta pointed out that "this is an organization that you once described as a J.V. team that evolved into a force that has now occupied territory in Iraq and Syria, and is now able to use that safe haven to launch attacks in the other parts of the world." He then asked, "How is that not underestimating their capabilities and how is that contained, quite frankly?...I guess the question is, and if you'll forgive the language, is why can't we take out these bastards?"

Cooper later turned to Cruickshank and Borger, who both seconded Amanpour's take on the President's strategy:

COOPER: Paul, what did you take from this?

PAUL CRUICKSHANK, CNN TERRORISM ANALYST: Well, there's no change in strategy. Clearly, the strategy is not working, because of the terrible terrorism we've seen — in Paris; in Beirut; in Ankara; that Metrojet which went down — likely terrorism; likely ISIS.

Sure, they've shrunk the territory they control a little bit in Syria and Iraq, but this is a group now using those countries — a huge safe haven there — as a platform for international terrorism. They're the richest terrorist group in history — tens of millions, if not more in — in the bank. They've got up to 6,000 European recruits coming in — joining the various groups and ISIS. They've got training camps on a scale bigger than we saw in Afghanistan before 9/11. And all of that requires more urgency, I think, from all international ears — not just the United States. Clearly, the United States needs to take a leadership role. I don't think it's the speech people in Paris today wanted to hear.

And so, all of this is — is a huge concern. And so, the idea that — that you can really contain a terrorist group doesn't really make sense, because you cannot deter terrorist groups like you can deter rogue nation states — because they — they have this desire, which they believe comes from God, to launch international terrorism — attack the West. And I don't think that this is the response that the people here were looking for.

COOPER: And Gloria Borger — Gloria, I know you were listening to the — the speech as well. What did you take away from President Obama's speech?

GLORIA BORGER, CNN CHIEF POLITICAL ANALYST: Well, what I took away was this is a president who was very defensive about his policy; who had to explain what he meant about ISIS being contained; and who said that a lot of his critics are playing political games, and that he doesn't have that luxury to pose, as he put it; and that some people think if I were more bellicose — this is the President's word — that it would — that it would make a difference. You know, this is a — this is a president who is, as he says, going to intensify his strategy, but not going to change his strategy. I think his problem is that he has to be able to tell Americans, who may be worried — and tell the world why his strategy is going to work, when they've seen that it isn't working, given what occurred in Paris.