MSNBC’s David Shuster and Tamron Hall labeled the circulation of a photo of President Obama allegedly glancing at a teenager’s posterior a “right wing smear,” and singled out Fox News and Drudge as culprits. They brought on a Media Matters spokesman, who accused these sites of being motivated by a “racist stereotype of an oversexed black man being a predator.” They let this accusation go unanswered (audio clip from the promos and the segment available here).

Shuster and Hall promoted the segment on the Obama picture from the start of the 4 pm Eastern hour of MSNBC’s live coverage. A graphic on-screen at the top of the hour pondered, “Right Wing Smear?,” as Shuster read the first teaser: “Plus, smearing President Obama- some on the Right went crazy over this photo they claimed shows President Obama with a wandering eye. But check the tape- the actual video shows a far different story- why the Right was so wrong with this one.”

The MSNBC anchor echoed his “why the Right was so wrong” phrase during the second promo at 19 minutes into the hour: “Up next, what the Right did wrong with that President Obama photo that was splashed all across some conservative websites. Why didn’t they bother to check the tape before making false accusations?” Right before the commercial break which preceded the segment, Hall broke back in with the final promo: “And when pictures do not say a thousand words- heck, when pictures right out deceive- why this misleading photograph was very popular on conservative blogs and conservative papers.”

When the segment finally began at the bottom of the hour, Hall highlighted how the picture “was posted on a right-wing website, and launched a thousand words about President Obama. Beginning late Thursday afternoon, this picture appeared on the Drudge Report, and we just checked just five minutes ago, and it’s still at the top of the website. It appears to show President Obama and French President Nicolas Sarkozy sneaking an admiring look at a young lady from Brazil- some reports said she was 16.” They played what purported to be the video from the moment the photo was taken, but upon examination, it was a snippet from immediately after that specific point in time (ABC’s Good Morning America played the entire sequence; see the video clip here for MSNBC’s version).

Shuster then introduced Carl Frisch, “a senior fellow at Media Matters for America” (as you can see, the MSNBC anchor omitted the left-wing affiliation of the organization), and asked, “Carl, this has been bouncing around all over the conservative blogosphere, conservative networks. What are they doing here?”

Frisch immediately launched into his accusations:

FRISCH: It started yesterday afternoon on FreeRepublic.com, which is an extremely conservative message board, and basically, they posted this Reuters photo, asking their readers to caption it, and what followed was a string of racial expletives, and just kind of gutter swamp verbiage that I don’t think anybody would want to hear on television. About 30 minutes later, Drudge put it up with, you know, a blaring headline that said ‘Mr. President,’ and then, you know, a little bit later, and it ended up on the FoxNation.com, which is the Fox News Network’s right-wing website, basically making the same point, and then onto ABC’s The Note- which shows you what we’re looking at here is really an echo chamber where things start in extremely conservative circles, and through repetition, they end up in the mainstream press.

After submitting his own compliment of van Sustern, Frisch singled out Matt Drudge by name: “You know, the frightening thing here is that this is not the first time this has happened. We all know that this happens with the Drudge Report. He’s kind of like the fedora-wearing boy who cries wolf, and you’d think that by now members of the media would know not to come calling every time he- he puts something across his website.” He also acknowledged Good Morning America’s  “fact check” of the photo, but claimed that “segments like these [van Susteren and GMA]...are the exception to the rule, rather than the standard.”

The Media Matters mouthpiece saved his most explosive ammo against conservatives towards the end of the segment. When Hall brought up how “a couple of African-American blogs...and one of them even said, President Obama looking at a 17-year-old thang,” Frisch appeared to brush that anecdote aside and fired a full broadside:

FRISCH: You know, one of the things that was said on Free Republic was comparing President Obama to Michael Jackson, calling him a pedophile. That’s the length to which this kind of stuff will be twisted....We’re seeing a misconstruction of a photo. To many people online, this has racial overtones. You know, this is like the antiquated racist stereotype of an oversexed black man being a predator, and that’s the way some conservative circles are talking about it online, and that’s unfortunate. And the problem here is that it’s not even true. This didn’t even happen. You know, if- if he hadn’t have been watching a step and tumbled down the steps, we’d probably be talking about him falling. 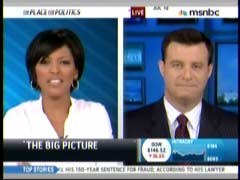 The only response either Shuster or Hall said in response to the fellow’s inflammatory accusation against conservatives was Hall replying, “Yeah.” Shuster thanked Frisch, and concluded the segment with his own lament/condemnation of the conservative websites: “Tamron- you know, I do think that some of these conservative sites- they know exactly what they’re doing. They know that they’re- they’re throwing a fuel on the fire, and it’s- it’s outrageous.” Hall replied, “Right, and which puts the onus on these sites that are supposed to be telling the truth, or even if you want to say the liberal ones out there, if that’s the side of the conversation we’re going is right or left- they should call them out on it, too....I’m not advocating fighting, but for once, battle it out with the truth.”