CNN: Republicans Become Dems in PA, But Not Due to Rush’s ‘Dark Strategy’ 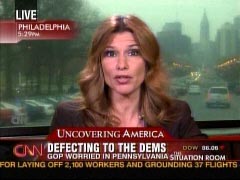 CNN’s Carol Costello highlighted Pennsylvania Republicans who became registered Democrats on Friday’s "The Situation Room," and brushed aside the possibility that Rush Limbaugh’s "Operation Chaos" strategy to meddle in the Democratic primaries might be a partial explanation for the change. Costello, featuring two former Republicans who are now voting for the Democrats, said of the couple, "[I]f you think either Conrad is switching because they buy into Rush Limbaugh's dark strategy to weaken the Democratic party...."

Peggy and Charles Conrad, the two "Republicans for more than 20 years" that Costello spoke of, played a prominent role in the report. Costello reported that Mrs. Conrad "plans to vote for Hillary Clinton, because in her mind, the GOP has become too socially-conservative." Mr. Conrad, on the other hand, "is torn between Clinton and Obama -- caught up in the drama of the Democratic contest." 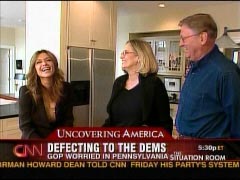 Costello appeared on-camera with the Conrads in their home, and when the CNN correspondent asked if Limbaugh's "dark strategy" played any part into their decision to become Democrats, she shared the seemingly light moment by laughing with them as they denied listening to top-rated talk show host.

Besides the Conrads, Costello featured another "life-long Republicans" whose decision to support Barack Obama was "agonizing."

Both Costello and "The Situation Room" host Wolf Blitzer emphasized how the Pennsylvania Republican Party apparently found the switch to be "worrisome." As Blitzer put it in his introduction to the report, "As the Pennsylvania primary campaign heats up, some long-time Republicans -- Republicans are defecting to the Democrats, and the GOP is deeply worried."

The full transcript of Carol Costello's report, which aired at the bottom of the 5 pm Eastern hour of Friday's "The Situation Room."

WOLF BLITZER: As the Pennsylvania primary campaign heats up, some long-time Republicans -- Republicans are defecting to the Democrats, and the GOP is deeply worried. Carol Costello is joining us now from Philadelphia. She's watching the story for us. You're aboard the CNN 'Election Express.' What are you picking up, Carol?

CAROL COSTELLO: Well, Wolf, the number is pretty big. 87,000 people switched to Democrats here in the state of Pennsylvania, and that number is big enough to concern the Pennsylvania GOP.

COSTELLO (voice-over): Democrat, Republican -- labels that don't seem to inspire the intense loyalty of the past. Pennsylvanians Charles and Peggy Conrad, Republicans for more than 20 years, have switched.

SENATOR HILLARY CLINTON, ILLINOIS: ...And I carry that experience...

COSTELLO (voice-over): She plans to vote for Hillary Clinton, because in her mind, the GOP has become too socially-conservative. He is torn between Clinton and Obama -- caught up in the drama of the Democratic contest.

COSTELLO (on-camera): Did you think about John McCain through any of this?

CHARLES CONRAD, FORMER REPUBLICAN: Yes, I've been a life-long Republican, and I listened to him and that. But I -- this country needs good leadership. And if it comes from the Democratic side, then I would vote Democratic.

COSTELLO (voice-over): And if you think either Conrad is switching because they buy into Rush Limbaugh's dark strategy to weaken the Democratic party...

LIMBAUGH: I'm asking people to cross over, and if they can stomach it -- I know it's a difficult thing to do for a Clinton. But it will sustain this soap opera.

COSTELLO (on-camera): Did that enter into your decision?

COSTELLO (voice-over): If they did, perhaps the Pennsylvania GOP wouldn't find this so worrisome.

ROBERT A. GLEASON, JR., CHAIRMAN, PENNSYLVANIA GOP: I'm not happy when people switch over, but we're going to work hard to get them back and explain to them why they should be Republicans again, and then we'll go at it for November.

COSTELLO: And that may be difficult. The decision to join the Democrats isn't easy. Life-long Republican Linda Lemmon is now supporting Barack Obama. She says her decision was agonizing.

LINDA LEMMON, FORMER REPUBLICAN: I think I'm a Democrat now. I probably will remain a Democrat, because I did not make this step lightly. I thought about it. And I took it as a -- as an American citizen -- of wanting, you know, to help my country.

COSTELLO: And for the Conrads, the idea of switching back may cause a different type of pain.

C. CONRAD: I'm an observer, and I will observe and listen until the day of the election.

C. CONRAD: But I go into the secret little ballot box and I vote my own way.

COSTELLO (on-camera): And that is very true. You know, Wolf, one expert told me it's very hard to switch, once you switched. I mean, changing your affiliation is sort of like changing a part of yourself. So, it's unlikely that most voters who have switched to becoming either a Democrat or a Republican will switch back during the general election.

BLITZER: That's a fair point. I know a lot of friends of mine who have switched parties and become ardent in their new party, and it would be impossible to even think of going back to their old party. Carol, thanks very much for that.