Jon Stewart: Trump Uses Journos’ Own 'Narcissism' Against Them 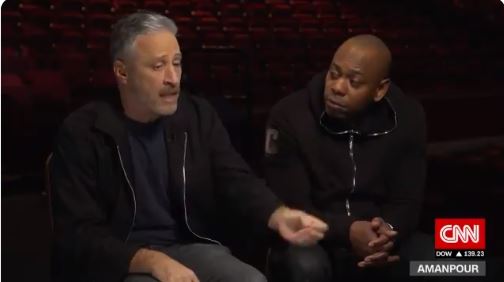 Imagine a CNN personality claiming to be mystified by the “daily Trump-fest.” This is, after all, the network of Brian Stelter, who never misses an opportunity to whine that Trump is “poisoning the American people” against the media.

But let’s pretend that Christiane Amanpour really does lack all self-awareness and, perplexed, she recently turned to journalism mentor Jon Stewart for guidance. “I mean, every single newspaper, every radio station, every bit of social media …” she complained to the former Daily Show host in an interview that included comic Dave Chappelle.

“That might have been an issue -- and maybe it still is an issue for the people who are the bean counters,” Amanpour sniffed, “but we the journalists, we I think believe that our job is to navigate the truth and do the fact-checking and all the rest of it.”

“But I think the journalists have taken it personally,” Stewart said. “They’re personally offended and wounded by [Trump]. He baits them and they dive in -- and what he’s done well I thought was to appeal to their own narcissism, to their own ego.”

Narcissism in the Fourth Estate? Jima Acosta’s ears must have been tingling.

Stewart continued, saying “The journalists stand up and say ‘We are noble. We are honorable. How dare you, sir!” And they take it personally. And now, he’s changed the conversation to not that his policies are silly or not working or any of those other things. It’s all about the fight. He’s able to tune out everything else and just get people focused on the fight.”

When Amanpour protested “it’s hard for us to be dispassionate when words from the White House are aggressive against us,” Stewart wasn’t having any of it. He told Amanpour to think how much worse the words from the administration are for “the communities of color.”

So make no mistake, Stewart is still a liberal and still talking garbage, but he’s clear-eyed about the media and is willing to say it to CNN. That’s pretty refreshing.