NBC Frets Over 'Brutal' Attack on Hillary From 'Anti-Clinton' Website

Instead of treating Hillary Clinton as a possible presidential candidate who must be vetted, NBC framed her as a sympathetic victim of a "brutal" and personal attack on Monday's Nightly News.

We should note that the author of "The Hillary Papers," Alana Goodman of the Free Beacon, spent some time with us at NewsBusters and MRC's Culture and Media Institute.

Anchor Brian Williams teased the report as an opportunity for an ugly GOP ambush:

"Still ahead for us tonight, the private lives of Bill and Hillary Clinton. And what she admitted to a close friend about some of their most trying times. These new revelations as Republicans take early aim."

And NBC brought on a University of Arkansas professor who dismissed the published excerpts as "very cherry-picked." Mitchell closed her report with this sympathetic take: "Hillary Clinton had no comment on a campaign already brutal two years before it's begun."

In contrast, ABC was much more straightforward in reporting the Blair papers. They credited the "conservative Washington Free Beacon" with the story and simply reported the "new revelations" about Clinton.

Below is a transcript of the segments: 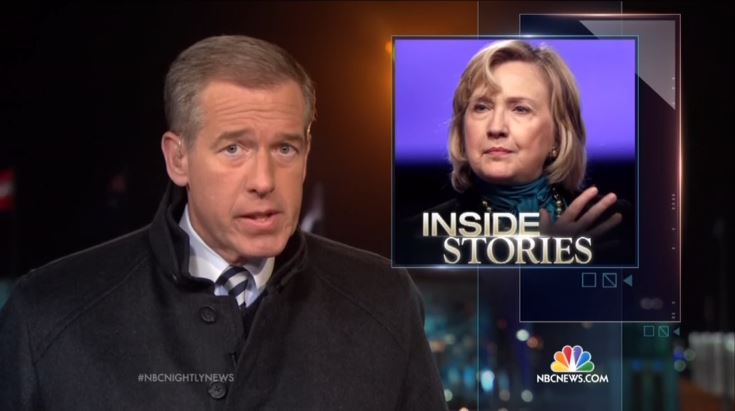 BRIAN WILLIAMS: Still ahead for us tonight, the private lives of Bill and Hillary Clinton. And what she admitted to a close friend about some of their most trying times. These new revelations as Republicans take early aim.

WILLIAMS: Tonight, the once-private papers of the woman Hillary Clinton has previously described as her closest friend are getting a lot of attention, because they reveal some of what was going on behind the scenes during the Lewinsky affair and other tough times for the Clintons. It's all coming to light and Republicans say it's fair game with 2016 approaching. We get our report tonight from NBC's Andrea Mitchell.

ANDREA MITCHELL: (voice over) After the music stopped at their first inaugural, the Clintons' first overnight guests were their closest friends from Arkansas, Diane Blair and her husband, Jim. For years, Diane catalogued Hillary Clinton's reactions to the rough relations with the press, and scandals, including Monica Lewinsky and impeachment, all available at the University of Arkansas for four years, getting little notice until inflammatory excerpts were posted last night on an anti-Clinton website.

Dr. ANGIE MAXWELL, University of Arkansas: I think that it's very cherry-picked. it's very selected.

MITCHELL: Thanksgiving, 1996, Blair quotes Clinton saying "I'm a proud woman. I'm not stupid. I know I should do more to suck up to the press. I know it confuses people when I change my hairdos. I know I should pretend not to have any opinions, but I am just not going to. I'm used to winning and I intend to win on my own terms." Their friendship ran deep. Bill Clinton had officiated at the Blairs' wedding. The women shared everything.

MAXWELL: Their friendship was originated when they were both here at the University of Arkansas, as young professors, moms, and they met for lunch regularly. And they were two of the only female faculty on campus.

MITCHELL: September 9, 1998, Bill Clinton had finally admitted his relationship with Lewinsky. Blair writes of Hillary, "she is not trying to excuse him; it was a huge personal lapse." But she says to his credit, he tried to break it off, tried to pull away." Blair did not survive to provide context for her diary. Now Republicans say her notes are fair game.

REINCE PRIEBUS, Republican National Committee: I think everything's on the table. I don't see how someone just gets a pass on anything, especially in today's politics, so I think we're going to have a truck load of opposition research on Hillary Clinton.

MARK HALPERIN, Time Magazine: That is good politics for the Republican party that right now doesn't have any candidate who can match up with the strengths of Hillary Clinton.

MITCHELL: Hillary Clinton had no comment on a campaign already brutal two years before it's begun.

GEORGE STEPHANOPOULOS: And now to those new revelations about former secretary of state Hillary Clinton, including one of the most explosive chapters from her White House years, the Monica Lewinsky scandal. Private observations from a trusted friend whose secret diary is making headlines tonight. ABC's chief White House correspondent Jonathan Karl has the story.

JONATHAN KARL: (voice over) Until her death in 2000, Diane Blair was one of Hillary Clinton's very closest friends. The long-time University of Arkansas professor kept a detailed diary during Mrs. Clinton's time in the White House. A diary that remained secret for years. Among the revelations, new insight into what the then-First Lady was thinking in the days after Bill Clinton admitted having an affair with White House intern Monica Lewinsky.

BILL CLINTON, former President of the United States: Indeed I did have a relationship with Ms. Lewinsky that was not appropriate. In fact, it was wrong.

KARL: It was a lapse, Blair writes, but she says to his credit, he tried to break it off, tried to pull away, tried to manage someone who was clearly a "narcissistic loony toon." But it was beyond control. Blair says Hillary insisted, quote, "it was grossly inappropriate behavior, but it was consensual." According to Blair, Mrs. Clinton put some of the blame for the affair on the pressures of the White House and herself. She thinks she was not smart enough, not sensitive enough, not free enough of her own concerns and struggles to realize the price he was paying.

KARL: The papers previously under seal were first reported today by the conservative Washington Free Beacon. The diary portrays Mrs. Clinton as a hard-nosed political operative, who was, quote, "in despair that nobody in the White House is tough and mean enough." She's especially frustrated with criticism of her own assertiveness. "I'm a proud woman," the diary quotes Mrs. Clinton saying in 1996. I know it confuses people when I change my hairdos. I know I should pretend not to have any opinions. But I'm not going to. I gave up my name, I got contact lenses. But I'm not going to pretend to be somebody that I'm not."

STEPHANOPOULOS: And Jon, the Clinton camp has obviously known for a long time that this diary would come out one day. How are they responding?

KARL: Well Clinton supporters are saying that they don't see anything particularly damaging in any of this. Her spokesperson simply declined to comment on the papers at all today.