Piers Morgan Scoffs at 'Binders' Frenzy, But Other CNN Reporters Jumped All Over It

Liberal CNN host Piers Morgan canned the Democratic "binders full of women" attack on Romney as "facile and silly," but CNN reporters hammered on it Wednesday night and well into Thursday.

Surprisingly, Morgan threw his criticism in David Axelrod's face by telling him "I find it rather facile and silly, to be honest with you, that the Democrats are trying to make it fun of Mitt Romney for what seemed to be a perfectly reasonable to say, in the same way the Big Bird thing looked a bit silly and facile."

"I don't get what's wrong with it. I don't get why it made him a laughing stock. So what? He got a load of binders full of details about women who he wanted to hire to his cabinet. Good on him," Morgan insisted.

Morgan apparently didn't get the CNN memo, as colleague Anderson Cooper led his show with the "binders" story, Jessica Yellin said it "raises this question, can he [Romney] relate to working women?", and anchor Zoraida Sambolin asked if Romney's hiring record would "haunt" him.

Sambolin hailed the comment as "now a serious campaign issue." She fact-checked Romney's words while interviewing conservative Erick Erickson. He fired back, "I mean, seriously, CNN is going to focus on these four words over everything else?"

"But his cabinet was majority women. No, it's not going to harm Romney. This is such a nonsensical issue 19 days before the election. I mean, if the Democrats want to play here, it suggests that they're trying to rally their base," Erickson argued. 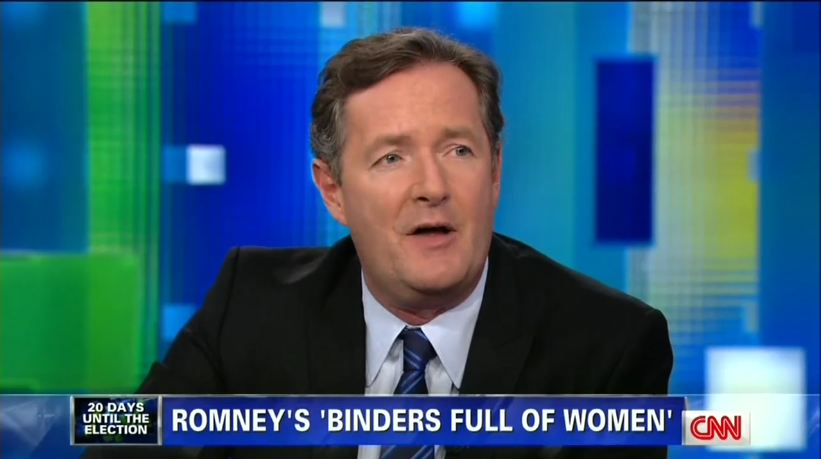 Anchor Soledad O'Brien brought up the issue on her morning show Starting Point, as well as Newsroom anchor Carol Costello during the 9 a.m. and 10 a.m. hours. Brooke Baldwin picked it back up during Thursday afternoon.

CNN played clips of comedians using the line to mock Romney. O'Brien asked Virginia Governor Bob McDonnell (R), "do you worry that this is actually going to affect women and their vote?" to which he replied "Not at all. This is a serious campaign."