CNN stoked fears that new voter ID laws might hearken back to the days of Jim Crow. Monday marked the anniversary of the Voting Rights Act, and CNN's Zoraida Sambolin used that to discuss whether the new laws might "suppress the minority vote."

"Do you think that having an African-American president is actually reigniting some of these old prejudices?" she asked former Ambassador Andrew Young who helped draft the 1965 Voting Rights Act.

Sambolin interviewed Young and activist Martin Luther King III, who dodged her attempts to get them to talk about racial and political implications in the laws.

"But there are concerns about the African-American turnout, as we've been talking about. Do you think the low turnout could hurt the president?" she asked Young.

And Sambolin injected race into the conversation from the beginning. "With America's first black president up for reelection this November, the conversation about voting rights has been reignited. 30 states are currently enforcing some form of voter ID law which many civil rights advocates say is an effort to suppress the minority vote," she began her report.

A transcript of the segment, which aired on Starting Point on August 6 at 7:11 a.m. EDT, is as follows:

ZORAIDA SAMBOLIN: Today marks the 57th anniversary of the Voting Rights Act, signed into law by President Lyndon B. Johnson on August 6th, 1965.

LYNDON B. JOHNSON, (D) former U.S. president: The vote is the most powerful instrument ever devised by man, for breaking down injustice and destroying the terrible laws which imprison men because they are different from other men. Today, what is perhaps the last of the legal barriers is tumbling, and there will be many actions and many difficulties before the rights woven into law are also woven into the fabric of our nation.

SAMBOLIN: With America's first black president up for reelection this November, the conversation about voting rights has been reignited. 30 states are currently enforcing some form of voter ID law which many civil rights advocates say is an effort to suppress the minority vote. 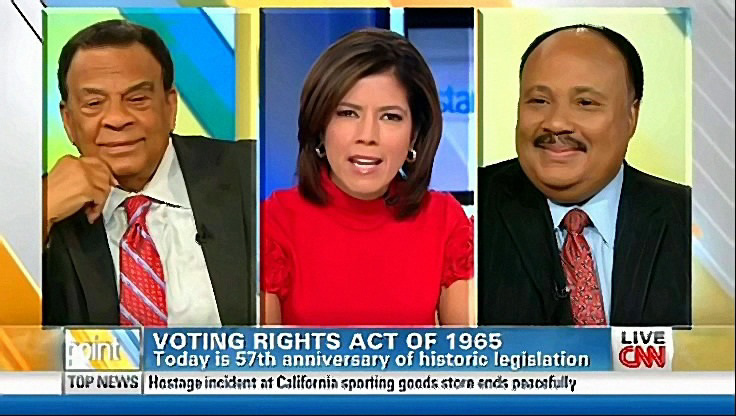 And joining me are Martin Luther King III, president and CEO of the King Center and oldest son of Dr. Martin Luther King Jr., as well as former U.N. Ambassador Andrew Young who helped draft the Voting Rights Act of 1965. He is issuing an open letter to America today to mark its anniversary. Thank you so much gentlemen for joining me this morning. Ambassador, I would like to start with you because you were there to witness history, you were present for the signing. America, we're wondering whether it has made any progress. What do you think the challenges are or continue to be?

Ambassador ANDREW YOUNG, former U.S. ambassador to the United Nations: We've made enormous progress, but what happens is we still don't have the majority of Americans participating in the election. Less than a third of the American population will even bother to vote. And there's something wrong with that. That -- the voting rights problem has been replaced by financial problems. And that now it's not who has the most votes but who gets the most money. And that has totally distorted our problem.

And we need to revise this Voting Rights Act to do something more along the order of some of our European or Israeli friends. They make voting mandatory and they vote on weekends when everybody can vote. And America can't be – I think we're number 139 in terms of percentage turnout of democratic nations. And we're supposed to be the leader of the free world.

SAMBOLIN: There is a lot of apathy. Mr. King, if you can tell me about this effort now, what you're doing, what it's all about and why we should care. Why are we talking about this this morning?

MARTIN LUTHER KING III, president and CEO, The King Center: My dad used to say that a vote-less people is powerless people. And one of the most important steps that we can take is the short step to the ballot box. This is the greatest democracy on the planet, and as Ambassador Young said, out of 170 plus countries we're number 138. That is unacceptable. We have got to find a way to make sure that access and opportunity is available for all people. And by virtue of the fact that there are nearly 30 states or a little bit more who have passed laws that might be perceived as restricting voting, I'm kind of disappointed that 47 years after the Voting Rights (sic) was signed on this day, that there may be some Americans who may not be able to vote because of what is perceived as some restrictions.

SAMBOLIN: Mr. King, you were talking about these restrictive voter ID laws so I want to put some information up for our viewers. It's a recent study from Brennan Center for Justice, and it says that in ten states that have passed restrictive voter ID laws since 2008, it could be more difficult for as many as 5 million voters to cast their ballot. What is the reaction to the claims about voter suppression?

YOUNG: Let me say to that that I just turned 80 years old. I was born in New Orleans. Now they tell me when I want to get my driver's license renewed, I have to have a whole raft of papers. I'm not sure I know where those papers are and I can't go all the way back to New Orleans to get them. It's just more and more cumbersome to vote. And that's not the direction in which a democracy should be moving.

SAMBOLIN: Well you have this awesome perspective -- congratulations on the 80 years of age. Do you think that having an African-American president is actually reigniting some of these old prejudices?

And I think the same thing is true with voting rights. Voting rights was a racial problem in 1965. Now it's a problem of voter participation for the elderly, for young, for college students. And the difficulties that make our vote less and less important because of the billions of dollars that are going into elections -- we will spend more money per vote on this election than any other election in our history.

And the next president, whomever that is, needs to change that and needs to make it possible for a citizens vote to count. And so next year on August the 6th, we hope to be in Washington talking to the next president about straightening out this voting procedure once and for all. First of all, it ought not be on a Tuesday in November. Chris Rock says if you want to have a party and don't want anybody to come, have it on a Tuesday in November.

YOUNG: But we can vote on weekends. Many countries vote on weekends and they get 80, 90 percent turnout. It's embarrassing for America to have less than a third of the people and usually that means that about 15 percent of the people elect the president. And he doesn't have a mandate, whoever he is, because you've got so many people frustrated on the other side because they did not have a place and they did not have a voice. We've got to give every American a voice in the election of our president.

SAMBOLIN: I'm sorry to interrupt you, and I know you don't want to break this down along racial lines, but Mr. King, I want to bring you back into this election. In 2008 President Obama took the black vote, and right now in the latest Gallup poll President Obama is crushing Romney among black voters, 87 percent to 5 percent. But there are concerns about the African-American turnout, as we've been talking about. Do you think the low turnout could hurt the president?

KING: Well, think the low turnout does not just impact the president, it impacts the whole process. And the reality is the goal should be to create the climate for everyone to participate, and, as Ambassador Young has said, to make it as easy as possible, not to make it as complicated as possible, so that seniors, so that students, so that maybe those who are immigrants who are legitimate cannot vote. The goal is to make sure that everyone has access.

SAMBOLIN: Ambassador Andrew Young, Martin Luther King III, thank you so much gentlemen for joining us this morning. We appreciate the dialogue and the perspective.

VELSHI: Andrew Young, not only 80 years old, and really accomplished. Delta has named a plane after him to celebrate his 80th birthday. Obviously he's a great Atlanta and Georgia presence.