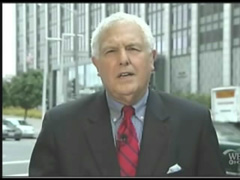 Reporting a U.S. District Court judge overturning California's Proposition 8, PBS correspondent Spencer Michaels noted that if the case is appealed to a higher court, the U.S. Ninth Circuit Court of Appeals would handle it. Michaels watered down the court's infamous history of liberal rulings, saying that though it may be liberal, it is not more so than any other U.S. Circuit Court.

The Ninth Circuit has "kind of a liberal bias – at least that's the charge," Michaels quickly corrected himself. "In actual fact, they probably aren't any more liberal than any other court," he insisted of the circuit with the dubious distinction of being the most-overturned of any by the Supreme Court.

The Ninth Circuit has a long history of being stacked with liberal judges since the days of President Carter, and infamously struck down "under God" from the Pledge of Allegiance in 2002. The Court has arguably inched to the right with the addition of moderate and conservative judges, but is still widely regarded as the most liberal of the circuit courts.

James Taranto, member of the editorial board of the Wall Street Journal, described the court as "notoriously liberal," in his piece about the reversal of Proposition 8. Ashby Jones, writing for the WSJ's law blog, said that the court has a reputation for being "packed with liberal judges."

The Los Angeles Times reported last year that 15 of the court's 16 cases reviewed by the U.S. Supreme Court were reversed. "Judicial analysts attribute the high reversal rate at least partly to the 9th Circuit's reputation as a liberal-dominated bench, even though more recent conservative appointments have diluted that influence," the paper reported.

Indeed, the New York Times reported this past spring that "outside experts who have examined the circuit for quantitative evidence of its leanings say that over all, it is indeed the most liberal circuit – but not by all that much."

JUDY WOODRUFF, PBS anchor: And as you suggest, the proponents of Proposition 8 had already served notice that they plan to appeal. What is their recourse here?

SPENCER MICHAELS, PBS correspondent: Well, they're going to go to the Ninth Circuit, which is California and the rest of the West's appellate court in the federal system. That court has a kind of a liberal bias, at least that's the charge. In actual fact, they probably aren't any more liberal than any other court. They're going to take up this case, and from there, what one of the lawyers I talked to today said, is that what happens in the Ninth Circuit is going to be very, very important, that they will set precedent. And if they set a precedent that makes the Ninth Circuit different than the rest of the country, then the Supreme Court will want to step in and settle this issue. You can't have gay marriage approved in the Ninth Circuit and not in the rest of the country. So the Supreme Court will want to get involved in that. So that's probably what will happen. It probably will go to the Supreme Court eventually. The people who are in favor of gay marriage aren't really happy to go to the Supreme Court at this point. They know the make-up of that court, and they probably figure that they don't have a big chance of winning.

WOODRUFF: And Spencer, you were saying in your report a few minutes ago that it's not clear the effect this is going to have on the other 49 states right now. What is your understanding of that?