Despite the Evidence, CNN Insists 'Monkeypox Is NOT a Sexually-Transmitted Infection'

CNN climbed up on its politically-correct soapbox on Monday's New Day with the subject being monkeypox thanks to this declaration from CNN national correspondent Dianne Gallagher that, in no uncertain terms, "monkeypox is NOT a sexually-transmitted infection."

There's a problem, however, with Gallagher's self-righteous spiel. All the data indicates that the overwhelming number of cases occurs among men who have sex with men. 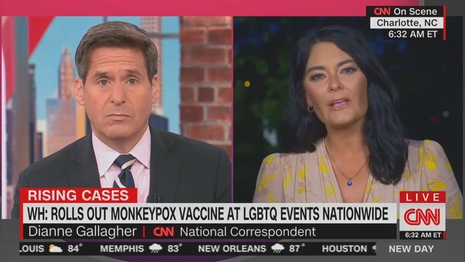 Below are some of the findings contained in an article in Scientific American, entitled "Monkeypox Is a Sexually Transmitted Infection, and Knowing That Can Help Protect People."

And note that the author, Steven Thrasher, is not some homophobic, conservative, white man. To the contrary, he is a biracial gay man who is a chaired professor of "social justice" and a past winner of the National Lesbian and Gay Journalists Association Journalist of the Year award.

Perhaps most notable was Thrasher's warning that by "not naming, researching, preventing and addressing how transmission is happening," people will be kept "from understanding how to prevent infection, allow unnecessary worry, and exacerbate racist and homophobic social determinants of health."

In other words, matters could be worse if there's a refusal to admit how it's been primarily spread.

From the article, here were some other takeaways (click "expand," emphasis added):

Note Thrasher's mention of the "backlash" against naming monkeypox a sexually-transmitted infection because it could create a "stigma" against gay people.

And indeed, Gallagher, who reported from Charlotte, NC following the city's Pride weekend, interviewed an attendee who expressed precisely that concern about a potential stigma. Echoed Gallagher: "[K]ey here from almost everyone I spoke with [is] making sure that you do not create a stigma around certain communities."

But as Thrasher pointed out in his concluding paragraph, rather than basing policy on concern about stigma, the truth about monkeypox, "is nothing to be ashamed of or to hide; it is something to be addressed to protect people who deserve the dignity of a proactive campaign that centers our needs during a public health emergency."

Note also that the World Health Organization is considering reclassifying monkeypox as a sexually-transmitted infection, given that "[t]he virus is transmitted almost exclusively through the sexual networks of gay men but can also spread through other forms of close contact" [emphasis added].

CNN needs to climb down from its woke perch and acknowledge the reality of monkeypox. Refusing to do so ultimately harms the very people CNN would purport to be protecting.

Gallagher proclaiming, despite the evidence, that Monkeypox is not a sexually-transmitted infection, was sponsored in part by Expedia, Samsung, maker of Galaxy phones, Sleep Number, GoDaddy, ADT, and 4Imprint. Their contact information is linked.

JOHN BERMAN: This morning, new action to try to slow the rising case count of monkeypox. Over the weekend, the White House began its pilot program, sending 50,000 doses of the monkeypox vaccine to LGBTQ events nationwide. Dianne Gallagher is in Charlotte, North Carolina, this morning, which held Pride events throughout the weekend. What did you see there, Dianne?

DIANNE GALLAGHER: Hey, you know, John, the Pride festival ended this morning here in Charlotte, but it is only the beginning of the Biden administration's efforts to accelerate the monkeypox vaccine, and the federal response to the outbreak.

GALLAGHER: The North Carolina city' Pride festival is the launch site of a Biden pilot program to send 50,000 doses of the monkeypox vaccine to LGBTQ-centered events, like Pride, around the country.

GALLAGHER: But something that is bothering people at Pride --

JENNY GUNN: We're very aware of not stigmatizing it as just a gay-man's disease, just like HIV was in the '80s and '90s.

GALLAGHER: -- men who have sex with men, and transgender people, do make up the majority of monkeypox cases right now, which is why they're being prioritized with the limited vaccine supply. However, monkeypox is not a sexually-transmitted infection, and any person can get it from prolonged, close, typically skin-to-skin contact with an infected person, so if the Biden administration wants its outreach to be a success, celebrating, while educating, without discriminating, is the only way to approach it.

GUNN: It's good to see the community back and, yeah, it's -- it's a great moment for all of us. And that's what should be talked about, and we can protect people and still not stigmatize them.

GALLAGHER: And that is key here from almost everyone I spoke with, making sure that you do not create a stigma around certain communities because of the monkeypox outbreak.