"We know the only reason that she was in Russia is because she was not able to make equal pay here in the United States that NBA stars would make. So that points to the disparity in American life"

So, according to Haq, it's really the United States, with its unequal pay for men and women, that is responsible for Griner's predicament!

If only Griner, ranked the third-best player in the WNBA, had an annual salary of $45 million like Steph Curry, the third-ranked player in the NBA, she wouldn't have traveled to Russia to play for a team there to enhance her relatively paltry WNBA salary.

Haq and Cross were wrong to criticize the lack of equal pay between WNBA and NBA players. Rather than pointing to a problem in American life, the disparity between Griner's salary and that of NBA stars is a function of the free market at work.

Griner makes the maximum WNBA salary of $228,000. The Phoenix Mercury is paying her salary while she's being held prisoner in Russia.

There are so many data points that prove this. Let's start with this one:

WNBA rosters have 12 players. If the players on just one team were paid the $6.4 million NBA average, it would more than wipe out the earnings of the entire league!

Along similar lines, NBA games in 2021-2022 averaged over 3 million viewers. WNBA games in a recent year averaged 205,000 viewers. And the NBA plays more than five times more games than the WNBA. So the total viewership is even more lopsided. 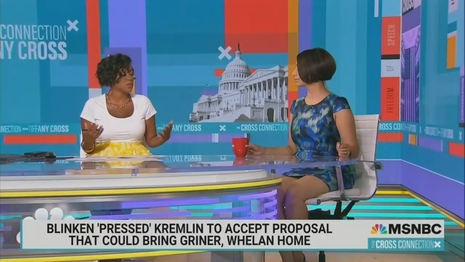 Perhaps sometime in the near future, President Kamala will appoint Cross her Wage Kommissar, allowing her to wipe out that awful "disparity" by dictating equal pay for men and women in all jobs across America.

So, Kommissar Cross . . . should Oprah's take have been reduced to that of some obscure show host on a minor network? For that matter, should Cross's pay be reduced to equal that of a humble NewsBusters blogger?

Haq closed the segment in classic liberal fashion, by dragging down the United States to the level of some of the world's worst countries. While warning Americans against traveling to places like Russia or Afghanistan, where they could be arrested on trumped-off charges and used as pawns à la Griner, Haq added:

"With that said, other countries are now issuing warnings about coming to the United States because of our gun control problem. So we have to recognize that.

We, here, also have our challenges that make other countries wary about spending tourist dollars here."

Cross, duly impressed by Haq putting the US in the same league as rogue nations, responded, "wow, yeah."

Tiffany Cross's MSNBC show blaming the imprisonment in Russia of Brittney Griner on the pay disparity between WNBA and NBA players was sponsored in part by Ensure, Ancestry, and Verizon.

NAYERRA HAQ: There have been political hostages, there have been US hostages, in a variety of circumstances, whether it's Syria, or Afghanistan, and now we see in Russia.

What we have seen, though, is that many of those individuals were working in the country, potentially with previous military or security connections.

Brittney Griner is a little different. Because she was a celebrity in Russia as well. Very high profile. And we know the only reason that she was in Russia is because she was not able to make equal pay here in the United States that NBA stars would make. So that points to the disparity in American life in a way that we typically don't see it when it comes to wartime hostages.

You know, there is a case -- a potential case, where we see the US government negotiating with Russia in this capacity. Does this put Americans at risk around the globe? Does this signal to other hostile nations that all I have to do is drum up some charges against an American, and then the U.S. will have to negotiate with me for things that I want? How does this impact us all as we travel, Nayyera? What are your thoughts?

HAQ: It's concerning, right? There are reasons why the State Department puts out notices of, do not travel to these places, right? Don't travel to Russia. Don't think you're going to go into Afghanistan and change the world. You are going to be at risk if you are an individual America.

Now, with that said, other countries are now issuing warnings about coming to the United States because of our gun control problem. So --

HAQ: --  we have to recognize that. We, here, also have our challenges that make other countries wary about spending tourist dollars here.