CNN wants you to believe that the Democrats are a political party . . . above politics. That in fashioning their policies, the thought that massive, record-breaking flows of immigrants across the southern border might help them politically never crosses the Democrats' minds!

And if you disagree? If you think that, in fact, Democrats view those immigrants as, in the phrase that Mark Steyn made famous, "undocumented Democrats," well then, you are a racist, spewing a "garbage" conspiracy theory.

That was the message Monday on CNN's New Day, in a segment centered on the Buffalo mass shooting in which 10 people were killed at a supermarket. As you'll see in the screencap, CNN's apparent intent was to blame Republicans for inspiring the suspected racist shooter.

CNN reporter Sunlen Serfaty cast Republicans and conservatives as embracing a "far-right" replacement theory. But when you actually listen to what people said in the clips CNN played, you'll note that they frame their views on Dem immigration policy explicitly in terms of its political implications, eschewing the racial or ethnic concerns that some on the fringe express.

Thus, Rep. Brian Babin said that the Democrat strategy is to replace the American "electorate." Rep. Scott Perry said the Dems' goal is to "transform the political landscape." Senatorial candidate J.D. Vance said that Democrats have concluded that they can't win unless they "bring in a large number of new voters." And Tucker Carlson said that Democrats are "importing a brand-new electorate."

And CNN deceptively edited its clip of Sen. Ron Johnson. They rolled the bit in which he said that Democrats are trying to change American "demographics"--but omitted what immediately followed: "to ensure their -- that they stay in power forever." So Johnson was speaking of the Democrats' political ambitions. But CNN made it appear he was focused on the racial or ethnic implications of their plans.

But again, that didn't stop Serfaty from branding their views as "racist, anti-immigrant." 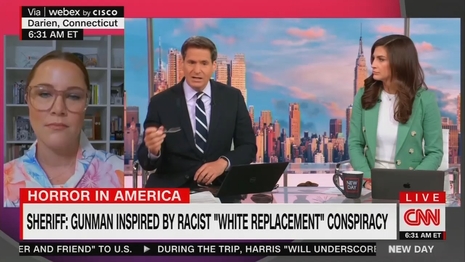 Then it was the turn of co-host John Berman. He feigned befuddlement over how one-third of Americans, as per polling, could possibly believe that, with their immigration policies, Democrats are seeking "political gain."

Berman can't possibly be so naive as to suggest that politics aren't behind the Dems' immigration policies. But he managed to keep a straight face while getting off his line.

Supposed "conservative" and CNN commentator S.E. Cupp proclaimed the shooter acted alone. "But there is a cause and effect to amplifying this garbage, and some of the consequences are intended, right? It stirs up racial animus, ethnic animus, religious animus. That is the intended effect of turning neighbor against neighbor, and getting people angry and afraid."

Cupp concluded by slapping conservative media and Republicans with mainstreaming the racists: "This garbage, that was once disqualifying, has been so mainstreamed by political leaders and far-right-wing media that they're not wearing hoods anymore; they're not hiding in the basement. They're out in the open."

Answer this question, CNN: if Democrats were convinced that the millions of people flooding across the southern border were going to overwhelmingly vote Republican, do you think their lax immigration/border policies would be any different?

We're thinking their response might be 200-ft. high walls with moats, and guards every quarter-mile!

CNN accusing those who believe that politics are behind Democrats' lax policies on immigration and the border of racism and "garbage" conspiracy theories was sponsored in part by Lactaid, PNC, Carvana, Clear Choice, Celebrity Cruises, and Tempur-Pedic.

REP. BRIAN BABIN: We know what the Democrats are up to here. they want open borders. This is exactly their strategy. They want to replace the American electorate.

REP. SCOTT PERRY: For many Americans, what seems to be happening, or what they believe right now is happening, is what appears to them is we're replacing national-born American, native-born Americans, to permanently transform the political landscape of this very nation.

SEN. RON JOHNSON: This administration wants complete, open borders, and you have to ask yourself, why? Is it really they want to remake the demographics of America?

J.D. VANCE: Democrat politicians who have decided that they can't win reelection in 2022 unless they bring in a large number of new voters to replace the voters that are already here. That's what this is about.

SERFATY: The theory has been amplified by voices on Fox News.

TUCKER CARLSON: I mean, everyone wants to make a racial issue out of it: ooh, the white replacement theory. No, no, no! This is a voting-rights question. I have less political power because they are importing a brand-new electorate. Why should I sit back and take that?

JOHN BERMAN: Joining us now, CNN political commentator S.E. Cupp. You know, S.E., I think we need to be careful, actually, referring to this as fringe, based on some of the polling here. The AP did a poll, roughly one in three, 32% of adults agree that a group of people is trying to replace native-born Americans with immigrants for electoral gain. How does an idea like this get to 32%?

S.E. CUPP: Well, right. I mean, you have to say at the outset, what this shooter did was his -- you know, his decision alone, no one, as far as I know, told him to go out and shoot up a supermarket.

But, there is a cause and effect to amplifying this garbage, and some of the consequences are intended, right? It stirs up racial animus, ethnic animus, religious animus. That is the intended effect of turning neighbor against neighbor, and getting people angry and afraid. Growing that, that base that is angry and afraid is part of the consequence, that's how it spreads.

The next consequence is, those people go out and vote for characters who believe in that . . . This garbage, that was once disqualifying, has been so mainstreamed by political leaders and far-right-wing media that they're not wearing hoods anymore; they're not hiding in the basement. They're out in the open talking about this, you know, openly, as if it's no big deal.