On MSNBC: Black Republicans Like Herschel Walker 'Shucking and Jiving' for White Handlers

Black Republicans work for the White Man. That's a theme of Tiffany Cross's MSNBC show. She began a segment on Saturday with "I'm just going to say it: I don't know a lot of black Republicans who really ride for black people." She showed video of Virginia's Lieutenant Governor Winsome Sears, Herschel Walker, and Sen. Tim Scott.

I make a hard distinction between black conservatives, of which there are many: one of whom [Eric Adams] was just elected mayor of New York City, in fact, and these tokens, who are out here right now, shucking and jiving for their white handlers.

Now imagine how Cross and Mystal would react if we said they were "shucking and jiving" for white executives at MSNBC.

Mystal gave the example of a hypothetical argument over the capital gains tax between himself and Cross's other guest, black conservative and political consultant Rufus Montgomery.

Mystal snidely asked whether Walker would even understand the argument. That elicited mocking laughter from Cross.

Because he's black, Mystal can get away with belittling the former football star's intelligence and castigating him in the foulest terms. Imagine a white conservative employing such language. He'd be defenestrated before the sentence even left his mouth. 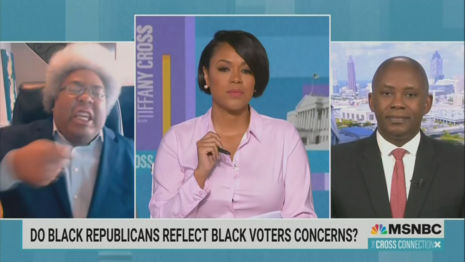 The irony is that Mystal earns his keep on MSNBC through his bombastic, bomb-throwing performance art. He's on Cross's show almost every Saturday precisely because she can count on him to summon up some outrageous shtick to titillate her audience.

Note: Let's give Cross credit for having, in the person of Rufus Montgomery, a bona fide conservative on her show. That's a refreshing contrast with MSNBC's SOP of only allowing "Republicans" of the Lincoln Project/Never Trumper variety on its air.

On MSNBC, Elie Mystal describing black Republicans like Herschel Walker as "tokens" who are "shucking and jiving for their white handlers" was sponsored in part by Walgreens, GlaxoSmithKline, maker of Voltaren, and Subway.

TIFFANY CROSS: Okay, I'm just going to say it: I don't know a lot of black Republicans who really ride for black people. I mean, just take a look at just some, just some of the things they're saying.

WINSOME SEARS: Why are we voting the way that we vote? What are the policies that we truly believe in? Because, you know, really, the black population, or the minority populations, were generally more conservative. We just don't vote that way. And so, they know that I'm a danger to them.

HERSCHEL WALKER: Senator Lewis was one of the greatest senators that's ever been, and for African-Americans that was absolutely incredible, I think now to throw his name on a bill for voting rights, I think it's a shame. First of all, when you look at the bill, it just doesn't fit with what John Lewis stood for.

TIM SCOTT: Hear me clearly. America is not a racist country.

CROSS: [Laughs] Those are all things not ever heard at the cookout; let me assure you. There was a record number of black Republicans running for office who seem to represent the interests of the GOP, and not necessarily the community.

I really want to have an honest intellectual exchange about why. So back with me now is justice correspondent for The Nation, Elie Mystal, and the author of the New York Times best-selling book, Allow Me To Retort. And, making his Cross Connection debut, this is a friend of mine, someone I've known for a long time, Rufus Montgomery. He's a lobbyist and Republican political consultant. So I know, he's definitely up for this conversation.

RUFUS MONTGOMERY: You started out saying it's not talked about at the cookout. It actually is talked about at the cookout . . . And in cookouts around the country, you'll hear people talking and having questions—African-Americans—asking questions: what are you getting for that actual vote? You're getting 90% of the time, most of the time, for one party. And what are you getting in return?

ELIE MYSTAL: Look, I make a hard distinction between black conservatives, of which there are many: one of whom [Eric Adams] was just elected mayor of New York City, in fact, and these tokens, who are out here right now, shucking and jiving for their white handlers.

And the way that you can know the difference between a token, and a person who just happens to have conservative views, is that the black conservative has an argument for why their policies will help the black community.

Do you think Herschel Walker understood that sentence? Do you? [Cross heard laughing off-camera.]