On her Saturday morning MSNBC show Cross Connection, host Tiffany Cross equated police in the United States to Russian dictator Vladimir Putin's military inflicting mass chaos and death on the Ukrainian people in an unprovoked war. Her reason? Well, she deemed it "hypocritical" for the U.S. to condemn the potential use of chemical weapons by Russia given that the police used tear gas on Black Lives Matter protesters.

Here was Cross, who was speaking with Obama Assistant Secretary of Defense Andy Weber: "The United States is very much against chemical weapons. Yet, police use tear gas here, right here in America, which is considered a chemical weapon. And so, is this a bit hypocritical, perhaps? Because we've seen tear gas used, particularly during the Black Lives Matter protests?"

Weber explained that there's an exception to the treaty banning chemical weapons for their use by law enforcement in crowd control. Oddly, Weber referred to the exception as a "loophole," as if it was something that unwittingly slipped by the treaty negotiators. In fact, it's clearly spelled out as an exception.

Cross grudgingly accepted Weber's explanation, saying, "Okay, you're the expert. I thought the chemical weapons convention outlawed the use of riot-control agents." 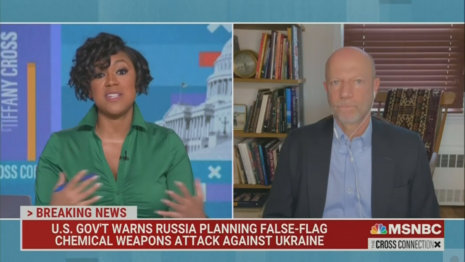 Note that both Cross and Weber ignored the dramatic distinction between tear gas used by U.S. law enforcement, and the kind of chemical weapons that Russia reportedly possesses. The effects of tear gas typically wear off in 15-30 minutes.

But for liberals like Cross, it's always Blame America First--particularly when it comes to defending the BLM riots, and condemning police attempts to control it.

Cross's insane comments were made possible thanks to the endorsement of advertisers such as Progressive, Kayak, Applebee's, Chase, and VisionWorks. Their contact information is linked.

TIFFANY CROSS: U.S. officials say that Russia may be plotting a quote-unquote false flag operation, in which they would deploy chemical or biological weapons, and then blame Ukraine for doing so. Now, Russia claims to have complied with international treaties calling for the elimination of these outlawed weapons. But the specter of chemical and biological warfare, like nuclear power, has been hovering over this conflict from the start, and would really bring this whole thing to a new level.  Joining me now is the Honorable Andy Weber. He's a senior fellow for the Council on Strategic Risk. He's also the former Assistant Secretary of Defense for Nuclear, Chemical, and Biological Defense programs, under President Obama.

CROSS: Where do these chemical weapons come from and how are countries able to get their hands on them, when they have been outlawed?

WEBER: Well, the ones that were used against Navalny and in Salisbury, England against Colonel Skripal were developed in Russian secret military laboratories. Indeed, their use in peacetime in those two attempts is the smoking gun that they are violating the chemical weapons convention, which prohibits making or stockpiling chemical weapons.

CROSS: You know, this is taking away a bit from the Russia conflict. But it is a bit interesting. Because the United States is very much against chemical weapons. Yet, police use tear gas here, right here in America, which is considered a chemical weapon. And so, is this a bit hypocritical, perhaps? Because we've seen tear gas used, particularly during the Black Lives Matter protests? I'm just curious your thoughts on the use of chemical weapons in law enforcement while we're telling other countries they shouldn't use it. Really nobody should use these, perhaps. But I'm curious your thoughts on that.

CROSS: Umm, okay. You're the expert. I thought the chemical weapons convention outlawed the use of riot-control agents. Oh, I guess you're saying in warfare, but not in law enforcement, perhaps. Got it.