MSNBC Panel: Biden An 'Albatross' Around Democrat Necks In the Midterms! 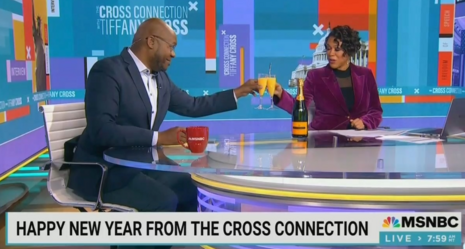 As you'll see in the screencap, Tiffany Cross was sipping a New Year's champagne cocktail on her MSNBC show this morning. Perhaps she should have used it to wash down a Prozac. Or two.

Because the news she was getting from her panel about the 2022 elections was decidedly depressing for liberals like her: Joe Biden is dragging down Democrat candidates across the country. One panelist even projected Biden as an "albatross" around the necks of Democrats.

Cross begged Fernand Amandi, an MSNBC analyst and political consultant, for hope that Raphael Warnock and Val Demings could win their respective senatorial races in Georgia and Florida. But in both cases, Amandi had to break the bad news to Cross: they are in trouble. And the key reason he gave that they and other Dem candidates are struggling is because:

"The majority is at hand for the Democrats is tied directly to the performance of President Biden at the national level [and] President Biden's approval rating now is sunk to some of the lowest points its been at his presidency. "

"It is difficult when you have the Biden administration struggling in so many parts of the country."

Jason Johnson, an MSNBC contributor, put the disaster for Dems that is Biden in even starker terms. Johnson asked Brown James what Biden needs to do:

"To raise his numbers so that he is not sort of an albatross on the neck of Democrats who are going to be running this fall?

Coleridge might call it The Rime of the Ancient Biden.

Notes: Amandi echoed a favorite liberal line: that Republicans winning congressional majorities would be a "a very difficult situation for our democracy." Scaremonger much? And Stephanie Brown James recommended that to lift his polling numbers, Biden should focus on "criminal justice reform."  Go for it, Joe! Support defunding the police and eliminating cash bail—could get your approval ratings right down there in single digits!

The panel on Tiffany Cross's MSNBC panel saying that Biden is dragging down Democrat candidates across the country, and is a potential "albatross" around their necks was sponsored in part by Kraft and Nugenix.

TIFFANY CROSS: Finally, it's officially 2022, which means midterms are now in full swing and the odds are not with the Democrats to maintain the majority on Capitol Hill.

Fernand, I have a question which is blowing my mind, my friend. How on earth is Herschel Walker running neck-and-neck with Raphael Warnock? Please tell me that there is a pathway to block this man from kicking Raphael Warnock out of the Senate.

FERNAND AMANDI: Well, I don't want to start 2022 in doomsday mode, Tiffany, but the truth of the matter is, it is a very difficult environment. As I said, right now, these states and all of these races are going to take place across the country. And where the majority is at hand for the Democrats is tied directly to the performance of President Biden at the national level. All of these races have been nationalized.

And the reason I think it's close in Georgia and it's close in some of these other states, even Arizona, is because President Biden's approval rating now is sunk to some of the lowest points its been at his presidency. Unless he can rise that approval rating and start to show and convince the American people of the really strong work that the Biden administration has done, transformational work in this past year, it's going to be very difficult to hold the Congress. And that presents a very difficult situation for our democracy.

STEPHANIE BROWN JAMES: I agree, you know, with Fernando [sic.] It is difficult when you have the Biden administration struggling in so many parts of the country, and how they're being able to relate and talk about their accomplishments.

CROSS: As you know, there are no black women in the Senate currently, which brings me to you, Fernand. You're in Florida, my friend. Tell me that Congresswoman Val Demings will become Senator Val Demings, especially given all the things happening in Florida right now. What are her chances looking like?

AMANDI: Well, Tiffany, I never lie to you or the viewers. And as much as I would personally like to see her defeat who I think is the least-respected and maybe one of the worst members of the Senate in Marco Rubio, right now, again, she's going to have a difficult time because Florida is now the state that you might call MAGA state.

JASON JOHNSON: So, Stephanie, you're in Ohio, a state that, again, some Democrats have now said has been abandoned. They say it's red. It used to be sort of purple, one way or another. You're having a sit-down with Joe Biden, theoretically. What are the two things that you think he needs to make sure he has accomplished by June of 2022 in order to raise his numbers so that he is not sort of an albatross on the neck of Democrats who are going to be running this fall?