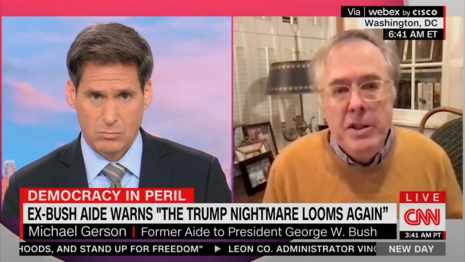 The Bush camp clearly despises Donald Trump. In his remarks at Shanksville, Pennsylvania on the 20th anniversary of 9/11, George W. Bush took thinly-veiled shots at Trump, alluding to him and his supporters as a "malign force."

But there was nothing veiled about the shots that former George W. Bush speechwriter Michael Gerson, now a Washington Post columnist, took at Trump today. CNN's New Day gave Gerson a platform to expand on his recent column, unsubtly entitled, "The Trump nightmare looms again."

1. It is likely that Trump will win the 2024 election.
2. And if he does win, he will use the powers of the federal government to punish opponents and make himself [as Berman suggested,] a near-dictator.

This crystal-ball futurism is mind-porn for the Trump-haters on CNN. Gerson also meshes nicely with his fellow columnist and "PBS Republican" David Brooks as they lob bombs at Trump on the Week in Politics panel at the PBS NewsHour. Gerson had a short-lived talk show on PBS under Trump.

It took him until the end of the segment to get there, but Gerson ultimately made his pitch: in 2022, Republicans should vote Democrat:

"At least in the near term, it is important for Democrats to win in, for example, the midterm elections. And this is going to require something hard from Republicans, which is to vote strategically for Democrats, because parties don’t change unless they lose. And the Republican party, if it goes from victory to victory with this content, with this message, is a true threat to the republic. " 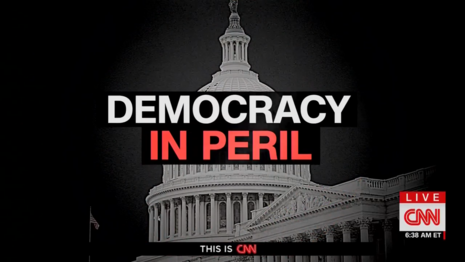 Note that CNN didn't just give Gerson a platform for his fear-mongering: CNN embraced it.  As you'll see in the screencap, CNN introduced the segment with a full-screen warning of "Democracy in Peril."

This is why Tim Graham described Gerson as a liberal clone last year: He used to write for President Bush, but "Today he sounds like a speechwriter for the gaseous opening of the Brian Stelter show on CNN."

Michael Gerson's everybody-vote-Democrat pitch was sponsored in part by GlaxoSmithKline, maker of Sensodyne and Breathe Right, Volvo, and Johnson & Johnson, maker of Listerine.

JOHN BERMAN: A dire warning from a top aide to President George W. Bush. In a new op-ed in the Washington Post, Michael Gerson writes, quote, "it is increasingly evident that the nightmare prospect of American politics, unified Republican control of the federal government in the hands of a re-elected, empowered Donald Trump in 2025 is also the likely outcome."

As for what it means, you write, "many of the professionals and patriots who opposed him, Trump in his final days, would have been weeded out long before he was re-elected. There is no reason Trump would not try to solidify personal power over military and federal law enforcement units to employ as a bully’s club in times of civil disorder. There's no reason he would refrain from using federal resources to harrass political opponents, undermine freedom of the press, and change the outcome of the elections."

You're basically suggesting he would use near-dictatorial powers.

MICHAEL GERSON: Yes. I mean, there would be limitations that he would face in the judiciary and other places. But we've seen that he wants to concentrate and centralize federal power to serve his interests and undermine his opponents. That is what we’re seeing from the historical record of his first term.

And I think Republicans need to take this seriously, too, like me. This means, at least in the near term, it is important for Democrats to win in, for example, the midterm elections. And this is going to require something hard from Republicans, which is to vote strategically for Democrats, because parties don’t change unless they lose. And the Republican party, if it goes from victory to victory with this content, with this message, is a true threat to the republic.