In a heated interview on CNN's New Day this morning, Joseph D. McBride, the lawyer for Capitol breach defendant Richard 'Bigo' Barnett—famously seen with his feet on a desk in Nancy Pelosi's office—condemned  the conditions of detention for the defendants, labeling them "D.C. Guantanamo Bay," and repeatedly accused the authorities of "torture."

Snide and smirking substitute host John Avlon took repeated shots at McBride, claiming that McBride's various arguments "make absolutely no sense," and are "utterly unbased in fact." In a parting shot, Avlon sanctimoniously said, "I had hoped you would have a more of a fact-based conversation with anything resembling a sense of perspective about an attack on our Capitol."

Unless you're John Avlon making jokes about Pat Buchanan's 1992 GOP convention speech. Or if CNN is comparing Fox News owner Rupert Murdoch to Nazi enablers. Or CNN is implying Trump and ICE deporting illegal immigrants is like the Nazis. 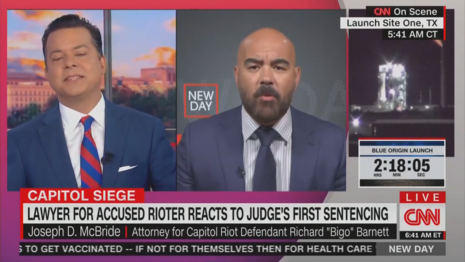 McBride accused the authorities detaining the Capitol defendants of beating and starving them, denying them medical care, the right to worship, and the right to see their attorneys and families. He said they are also being held in solitary confinement, which, in their pre-trial situation, he defined as torture. McBride's client Barnett was in solitary confinement for months. These torture claims may be overwrought, but CNN was much more sensitive about the treatment of the Islamic terrorism suspects held at Guantanamo.

McBride cited CNN legal analyst Jeffrey Toobin as saying that "insurrection should not be used in this case." Will it ever be possible to hear the name "Jeffrey Toobin" without you-know-what coming to mind?

Avlon's contentious interview was sponsored in part by Trivago, Amazon, ADT and Gillette.

JOSEPH D. MCBRIDE: There appears to be three categories of defendants who will be sentenced at this point: you have the misdemeanor trespasser or illegal protester, you have an individual like Mr. Hodgkins who made it into the Senate chamber, into the holy of holies during that time, during that sacred event . . . and it is very important not to lump everybody in, not to define every protester that showed up that day as an insurrectionist, which, by the way, no one has been charged with. Jeffrey Toobin, one of your own legal analysts, has said insurrection should not be used in this case.

AVLON: You wrote an essay for LinkedIn in which you said this: "Like the Gestapo did in Nazi Germany, the federal government is targeting anyone who criticizes the decision-making process, questions its motives or challenges its legitimacy." Look, Nazi comparisons are usually a sign you've lost the argument. But do you still believe the federal government is acting like Nazi Germany in its prosecution of the Capitol attackers?

MCBRIDE: Look, let’s leave Nazis out of this conversation.

MCBRIDE: Okay, fair enough. Like the Nazis, like the Soviets in the gulag, innocent men and women are being held in what we are calling D.C. Guantanamo Bay.

AVLON: Mr. McBride, you went on a Russian television station to plead this case and make this point. Do you think if an attacker broke into the Kremlin and sat at Vladimir Putin’s desk he'd be treated better or worse than your client's been treated after attacking the Speaker of the House’s office?

MCBRIDE: If the media, and the United States government, does not want to hold itself accountable for the human rights violations that are taking place at D.C. Guantanamo Bay, then who better to hold us accountable than the inventors of the gulags themselves? That is why I went there. To prove a point.

AVLON: Torture? What’s the example you have? Would you like to cite that? Pardon me, you’re saying people are being tortured by the White House. I just want to be clear because that’s an extraordinary statement which would seem to be utterly unbased in fact.

MCBRIDE: Oh, no: they are based in fact. And when the truth about the circumstances of confinement come out, you should hold yourself accountable for what you’re saying right now because I can tell you without a shadow of a doubt -—

AVLON: Do you think people should be held accountable for attacking the Capitol, and trying to overturn the elections, sir?

AVLON: You know what it sound like, Mr. McBride? It sounds like you and your client still believe the big lie.

MCBRIDE: The big lie, what does that mean? 75 million people believe that the big lie --

AVLON: It means lying about the results of the election. Mr. Mcbride, I want to thank you for coming on New Day. But I had hoped you would have a more of a fact-based conversation with anything resembling a sense of perspective about an attack on our Capitol.

AVLON: Keep yelling torture, we’ll stick with the facts. Thanks very much for joining us on New Day.

MCBRIDE: The facts are torture.