CNN, the alleged “facts first” network, made an absurd and egregious comparison last night on Twitter, demonizing Immigration and Customs Enforcement (ICE) officials as comparable to the Nazis. In a March 14 tweet, CNN touted their own report of a Jewish woman taking in illegal immigrants, “driven by thoughts of the Holocaust:” 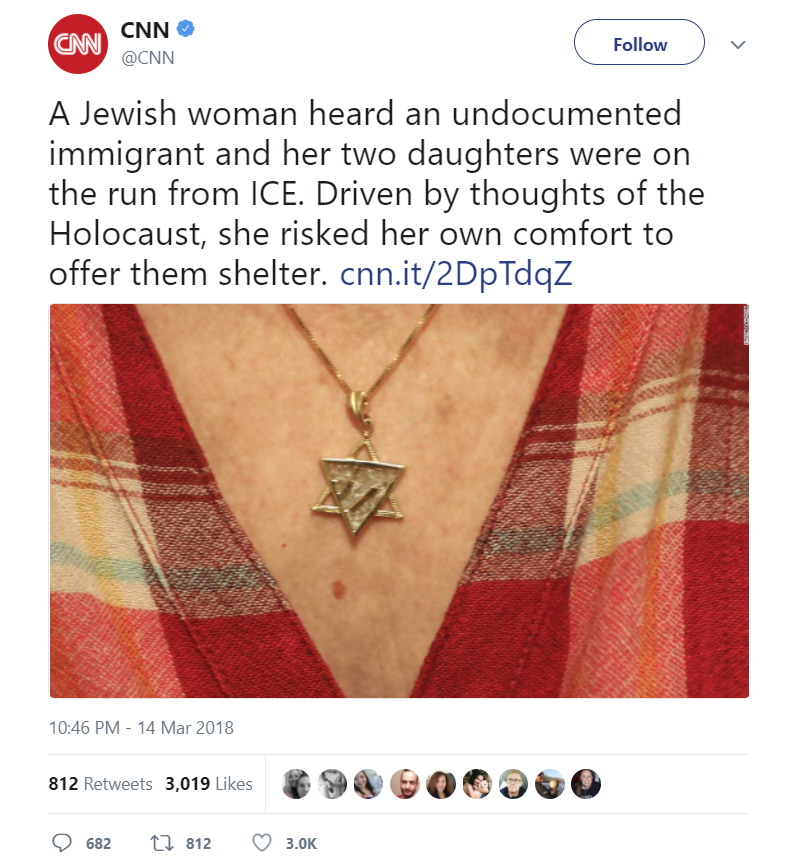 The linked to article was an empathetic sob story on their website as well as a segment on Erin Burnett OutFront March 14, about a couple who immigrated here illegally from Mexico and raised two daughters here, both who were born in the United States, now hiding from immigration authorities after the father was deported in 2016.

CNN immediately put President Trump to blame for their family’s struggle to keep their immigration status a secret.

But “a couple of months into the Trump administration,” their worst fears were realized, as one day after school the girls’ father didn’t pick them up. He had been detained and deported, “for entering the country illegally multiple times, decades ago,” Lah and Moya wrote.

Now, the family feared the mother was next because ICE was the villain working for Trump.

"ICE destroyed my home," the mother told CNN, before the journalists explained where the family found refuge and solace; in the care of religious liberals, of course!

They were taken in by a Jewish woman who felt it was her moral requirement to snub federal immigration authorities, whom she likened to Nazis in the Holocaust, again smearing President Trump as the enforcer of these supposedly unfair policies:

The network began after the election of President Trump and the fears -- and then reality -- that undocumented immigrants would face stricter enforcement action. For the woman, the link from the present to the history of World War II is strong.

"I grew up in the time where the Holocaust was not so far behind me," says the woman. "There was always that awareness, as a Jew, that it's possible to be kicked out of a country where people thought they were home. And many of those people didn't make it."

She says there is a strong feeling in the Jewish community. "We cannot let this happen. It's our responsibility. What was done to us cannot happen to other people."

Lah went a step further in the accompanying Erin Burnett segment, actually provoking the Holocaust comparisons from the Jewish woman, asking, "Do you hear the echoes of history here?"

CNN also interviewed the pastor of a church network who helps protect illegal families from ICE. Of course, he used the Bible to justify breaking the law, and CNN provided no pushback:

"I think we can stand on very solid scriptural ground and say no, this is not Christian behavior," says the Rev. Zachary Hoover, executive director of LA Voice, of the escalation of deportations under the Trump administration....Hoover, a youthful, slight, optimistic minister seems an unlikely organizer for a network directly sticking its thumb in the eye of the federal government on moral grounds..."My particular call in the gospel is to be in partnership and stand beside people who are most attacked, who are most at risk, who are most suffering," he says.

Despite being “nervous” about talking to CNN, the pastor explained he is “certain” that he’s following God’s law. “The truth is, our folks are facing a much greater fear every day," he told the news network.