CNN has been a slavish supporter of all things Biden—with one glaring exception. The network has been critical of Biden's precipitous withdrawal of all US combat troops from Afghanistan.

As early as April, when Biden first announced his intention to withdraw all US combat troops within months, we noted a surprisingly critical CNN segment on the subject.

That downbeat drumbeat continued this morning. Co-host John Berman opened New Day by solemnly warning that things are on the verge of "unraveling" in Afghanistan. And correspondent Anna Coren reported from Afghanistan "a deep sense of abandonment in the country." Co-host Keilar concurred: "there certainly is."

Among the ominous indicators Coren reported were: The ransacking and looting of the Bagram air base, with stolen American-made items turning up in the local bazaar; and the fleeing of 1,000 Afghan national soldiers from the battlefield and into neighboring Tajikistan. 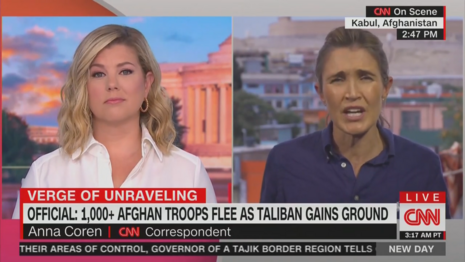 At the end of the segment, Berman did try to put some lipstick on the pig by bringing in Jeremy Butler, the CEO of "Iraq and Afghanistan Veterans of America," a left-leaning veterans group.

IAVA was founded by liberal veteran Paul Rieckhoff, who was a John Kerry ally, and gave the Democrat response to a George W. radio address in 2004. Just recently, Rieckhoff, in an MSNBC appearance, parroted a liberal trope by calling white supremacy the "number one national security threat in America."

Butler tried to downplay the problems. He first suggested there was nothing new about U.S. military goods turning up in local markets. Maybe so, via smuggling or corruption. But having the U.S. air base overrun and ransacked isn't positive news.

Butler also claimed that the desertion of Afghan troops was also not surprising. Maybe not, but 1,000 within a short period, and quitting the country altogether, puts things in a distinctly foreboding light.

Butler finally suggested that there was "wisdom" to the Biden-ordered withdrawal, given that even with 110,000 troops in the country at one point, the US was unable to stabilize the country.

Berman seemed to agree on that latter point with Butler, saying there are "no good choices in some ways at this point." But his ominous introduction of the segment, speaking of Afghanistan's "unraveling," and the report of dire events by the network's in-country correspondent, lent a decidedly downbeat cast to CNN's take on Biden's withdrawal decision.

CNN pointing to signs that Afghanistan is "unraveling' in the wake of the precipitous withdrawl of US combat troops ordered by President Biden, was sponsored in part by Expedia and AT&T.

JOHN BERMAN: New signs that Afghanistan is on the verge of unraveling as the U.S. leaves the war-torn country.

BRIANNA KEILAR: Developing this morning, more than a thousand Afghan soldiers fleeing the battlefield, escaping into neighboring Tajikistan as the Taliban expands its area of control and U.S. forces depart. New video shows American-made items from Bagram air base being sold at a local bazaar, after looters ransacked what was once the center of military power in Afghanistan.

ANNA COREN: Obviously the Taliban making more ground, claiming more territory. That assault up in the north where you have a thousand Afghan troops fleeing across the border into Tajikistan, certainly an alarming trend . . . In the meantime, there is this violence happening across the country where, you know, ten of thousands of people have been displaced . . . So we are expecting this humanitarian crisis to also unfold. This all happening after the U.S. pulls out of Afghanistan . . . We spoke to one Afghan official, military official, yesterday Brianna, out at Bagram air base. And he said the departure of the U.S. was like an old friend leaving without saying good-bye. There’s really a deep sense of abandonment in this country.

KEILAR: There certainly is.

BERMAN: Joining me now, Jeremy Butler, CEO of Iraq and Afghanistan Veterans of America. Jeremy, so great to see you here. A couple things that Anna just brought up. Number one, the idea that all these items that were at the Bagram air base have now either been looted or ransacked or leaked out of it, now for sale on the streets. Symbolically what does that say?

JEREMY BUTLER: Right, well I think symbolic is the key word here. I mean, it’s not new that there are U.S. and coalition items that make it out into the black market . . . You also have to remember that this is an incredibly tense time. It’s very hard, one, to do a withdrawal in a combat zone, but especially there at the very end. So it’s not surprising that things right there at the end were a little more secretive by the U.S. government than many Afghanis would have preferred.

BERMAN: I think a much greater concern, reports that a thousand Afghan troops have fled over the border to Tajikistan. Why is that so concerning?

BUTLER: Well it's concerning, one, because it’s not a new thing. Certainly the move to Tajikistan is somewhat new. But the high number of Afghan government forces, their losses, is not something new.

I think it also speaks to, in my opinion, the wisdom of making this decision at this time. If we have been in the country for 20 years, we've had upwards of 110,000 U.S. service members serving at a single time. We were down just recently to 2,500 and things like that. If even at this point things are still so fragile in the country, what is is it really going to take in terms of U.S. investment, personnel, time, money to get things to a point of stability where a U.S. withdrawal would make more sense, if you will. I think it speaks to how difficult the U.S. mMission has been throughout.

BERMAN: Yeah, no good choices in some ways at this point.