It used to be called a "crime wave," and the focus was on the criminals responsible. But that would be too triggering, pardon the pun, for liberals. They want to shift the focus away from the criminals and onto the inanimate objects criminals are using—guns. And thus this morning, CNN's New Day devoted a segment to what it called a "gun violence epidemic." The term "gun violence" was referred to no fewer than eight times. Mention of "criminals?" Nada, naturally.

And what is it about Democrats and the liberal media that makes them like to use vulgarity in their public statements? Co-host John Berman read a tweet from Democrat Senator Chris Murphy of Connecticut claiming that Republicans don't give a "s---" about gun violence. The word was expurgated in the chyron, but not in Murphy's tweet or Berman's reading of it.

The segment aired a statement in which President Biden, twice mentioning "gun violence," called it  a "public health epidemic." Anything to deflect attention away from the people committing the crimes. It's just a public health problem! 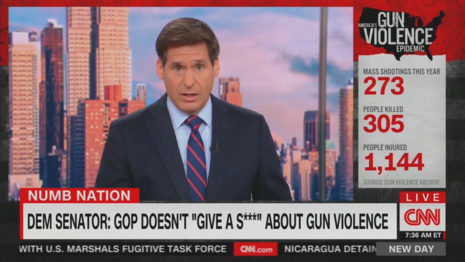 And of course, the segment ended with Berman and co-host Brianna Keilar calling for more gun control laws. Never mind that the thousands of such laws already on the books have obviously not stopped the criminals, er, we mean, the public health epidemic of gun violence!

Note: CNN correspondent Omar Jimenez was actually more fair 'n balanced than hosts Berman and Keilar. At one point he did mention that Chicago police were looking for two "gunmen." And in discussing the causes of the violence, he mentioned "economic hardships," but then added "strained police resources."

CNN's focus on "gun violence" rather than on criminals was sponsored in part by Lexus, Safelite, IHOP,  and Chewy.

BRIANNA KEILAR: This morning, Americans are waking up to news of yet another night violent and deadly weekend in the U.S. At least nine people were killed, and another 47 injured in eight mass shootings in six states. CNN’s Omar Jiminez is live for us in Chicago with more. I mean, this this really is an epidemic of gun violence, Omar.

OMAR JIMENEZ: A dangerous surge in gun violence is putting cities across the United States on edge this morning.

And since Friday afternoon, at least nine people are dead and 47 others injured after eight mass shootings in six states, according to gun violence archive data.

SINGER AT PULSE NIGHTCLUB MEMORIAL: [Singing] I make no apology: this is me.

JIMENEZ: The deadly surge in gun violence, as the nation paused to remember the 49 victims at the Pulse nightclub massacre five years ago. President Joe Biden announced the site will become a national memorial, and called on Congress to approve gun control legislation, writing in a statement:

"There is more we must do to address the public health epidemic of gun violence in all of its forms. Mass shootings and daily acts of gun violence that don’t make national headlines."

JIMENEZ: Some local leaders also calling for action, fearing gun violence will only continue to rise.

JOHN BERMAN: A pretty unusual statement from a US senator. This is Democrat Chris Murphy of Connecticut, who when he was in the House represented the distract where Sandy Hook Newtown, where that school is. So obviously he knows a lot about mass shootings in America. He’s calling out Republicans. This is what he wrote. He said:

"When Congress returns to work on Monday, half the members elected to protect the country won’t give a shit about the mass shootings"