Politico Reporter on Morning Joe: I'll Get 'In Trouble' For Saying FL Election Law Not So Bad

"The big lie" is perhaps the liberal media's favorite phrase nowadays. Shorthand, of course, for saying it's a lie to claim that the 2020 presidential election was tainted by fraud.

So if the MSM hates lies, you'd think they'd welcome the truth. But seems like they only want "truth" that fits their liberal narrative. Speaking inconvenient truths can get you "in trouble."

"I guess I’m going to say something that is going to get me in trouble, in that it’s not as bad as the critics say it is."

So Caputo knew that saying that the Florida law was anything less than horrific would earn him the ire of liberals in the media and elected office. It tells you everything you need to know about the MSM: they are all about propagandizing for the left. Any facts that don't comport with that mission are unwelcome, and can land the person who speaks them "in trouble."

Caputo went on to detail how in a number of ways, the restrictions established by the Florida law are actually quite mild, and that even after the law, voting in Florida will be easier than in many other states. Caputo even said he was glad he lived in Florida, given the ease of voting there!

For anyone who might imagine that Caputo is a closet conservative shilling for DeSantis and the election law: fuggedabouit! By his statements, Caputo made clear that he is anything but a conservative. 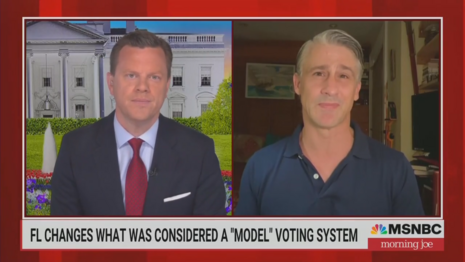 To the contrary, Caputo described DeSantis as a "reactionary, right-wing, conservative politician"—hardly the way an admirer would depict him. And he said the impetus for the Florida election law was based on "the lie" that the election had been stolen.

So Caputo had no political ax to grind in saying that the Florida law isn't so bad. He was just doing what reporters are supposed to do: report the facts. Even so, he was realistic about the sad state of American journalism, acknowledging that stating the truth would get him "in trouble."

At one point, Caputo said, "one of the animating principles in the Republican party right now is the hatred of the mainstream news media." Given what Caputo himself acknowledged—that a reporter would get "in trouble" for saying something that doesn't parrot the liberal line—how can you blame Republicans and conservatives for despising the MSM?

Politico reporter Marc Caputo saying on Morning Joe that he'd "get in trouble" for saying the Florida election law is not so bad was sponsored in part by Flonase and Amazon.

WILLIE GEIST: National political reporter for Politico, someone who knows Florida politics as well as anybody, Mark Caputo. Mark, good morning. It’s good to see you. So, first of all, the spectacle yesterday of the Fox News exclusive. Governor DeSantis obviously broadcasting to a national audience about a state law and also the particulars of what this bill does. What did you make of what you saw yesterday?

MARC CAPUTO: DeSantis, increasingly amid the pandemic reverted back to being much more of a reactionary, right-wing, conservative politician . . . One of the animating principles in the Republican party right now is the hatred of the mainstream news media, so the more criticism Ron DeSantis can get for things like signing an elections restrictions bill, the better it is for him as he eyes both his re-election in 2022 and a possible bid for president in 2024.

GEIST: So what does this new law do and why was he compelled to pass it?

CAPUTO: The law actually—I, I guess I’m going to say something that, that, that's going to get me in trouble, in that it’s not as bad as the critics say it is. Yet, it was premised on a lie. That is, there was not widespread, systemic voter fraud. Either in Florida or nationwide, or in swing states, that cost Donald Trump the election. And this was a reaction to that . . . So they made some changes around the edges. They made, they made the request for absentee ballots, it used to be on a standing list, you could get them for two general elections in a row, now you can just get them for one general election and the midterm.

There are more restrictions on what some people call ballot harvesting, which is when other people can drop off your ballot. Now I’m in Miami-Dade county. Incidentally we're the biggest county in the state. We already have some of those restrictions in place anyway.

And in the end, what you have here was a solution in search of a problem. And, you know, I can say that I’m glad I do live in Florida as far as voting, because we have 30 days of voting by mail still. Most states don’t have that. We have eight days of in-person early voting before Election Day, as a minimum! Here in Miami-Dade county, we’ve got 14 days of that. And then you’ve got Election Day voting.

So those abilities to cast ballots were not restricted. But these kind of smaller, minor changes that were made, things that do make it a little tougher for some folks to register to vote or some folks to cast their absentee ballots were made. There were also changes made in drop boxes, as well. Those were done largely to kind of placate the base, to say, you wanted us to do something, now we’ve done something.