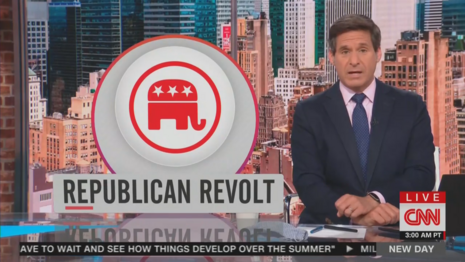 Wait: did CNN's John Berman just analogize Liz Cheney to Jesus Christ? Sure sounds like it!

On this morning's New Day, co-host John Berman eagerly reported "a senior House Republican tells CNN that congresswoman Liz Cheney could be in, quote, 'very big trouble.'" House Republican Leader Kevin McCarthy might be "hanging her out to dry."

Later, Berman added "his statements about Liz Cheney, the number three in the House, were almost biblical. Like, three times he denied her." That, of course, is a New Testament reference to Peter having denied Jesus three times.

Berman kicked off the excitement by announcing "The utter takeover [of the GOP] by Donald Trump is very nearly complete, and it seems that the chief requirement for membership is 100% buy-in to the election lie. Anything short of that, and you could be out."

Berman said Cheney could lose her House leadership position by the end of the month, given her criticism of Trump and vote to impeach him. Berman played a clip of McCarthy, asked about Cheney's "fit" in the leadership, curtly responding: "that's up to the conference."

This could leave the wrong impression, that Cheney's going to removed from office, and not from leadership. Co-host Brianna Keilar added "What does this say about the state of the Republican party and the future of it, that they’re completely banishing people like a Cheney or a Romney?" Being unpopular in the cloakroom isn't the same as losing an election.

But CNN's promotion of a Republican rift matches the "big picture" from Axios.com: "The divisions between the pro-Trump GOP and Cheney, as well as her allies like Senate Minority Leader Mitch McConnell (R-Ky.), threaten to derail the Republicans' chances of winning control of Congress in the 2022 midterms."

PS: Now that Berman has established himself as a New Testament scholar, should we expect him, as our Tim Graham has suggested, to point out that just like Jesus spent 40 days in the desert, Kamala Harris has spent 40 days without a press conference since Biden put her in charge of the border crisis? Don't bet on it!

This morning, a senior House Republican tells CNN that congresswoman Liz Cheney could be in, quote, very big trouble, and stands to lose her leadership role. She could be ousted, we’re told, by the end of the month. She voted to impeach Trump, and criticized senators who pushed the election lie. She also committed the apparently unforgivable sin of greeting the president in the House chamber last week.

And now, House Minority Leader Kevin McCarthy may be hanging her out to dry.

UNIDENTIFIED QUESTIONER: Is Cheney still a good fit for your leadership team, do you believe?

KEVIN MCCARTHY: That's a question for the conference [turns away, points at another questioner.]

BRIANNA KEILAR: Earlier this year, President Trump labeled Romney, and other Republicans who voted to impeach or convict him, "grandstanders" and "Republicans in name only." And those labels stuck . . . What does this say about the state of the Republican party and the future of it, that they’re completely banishing people like a Cheney or a Romney?

MAGGIE HABERMAN: So Brianna, I think it's too soon to say exactly how this plays out. But I do think we’re seeing the same situation that we have seen really for five years now taking place. We saw it at the very beginning of this phase with the Access Hollywood tape back in October of 2016, where the activist base of the Republican party is very aligned with Donald Trump, and some of the elected leaders, some of the leadership in Washington is not, and finds themselves at odds with their base.

And so then you have people like Kevin McCarthy who are trying to straddle both of those lines.

BERMAN: The question is, is Kevin McCarthy really still trying to straddle this? Because his statements about Liz Cheney, the number three in the House, were almost biblical. Like, three times he denied her. He basically said, it’s up to the conference to decide, Maggie. And there's some CNN and reporting from elsewhere where you now have Republicans saying she may not last in her leadership position for the entire month.