Gag Me With a Samovar! CNN Slobbers Over 'Impressively Productive' Biden-Putin Phone Call

The Abraham Accords, brokered by the Trump administration,  were a serious greatest diplomatic achievement by the United States. Four formerly hostile Arab nations established diplomatic relations with Israel, recognizing its right to exist and opening trade and tourism.

If Donald Trump were a Democrat, that would probably earn him a Nobel Peace Prize. Compare and contrast with Barack Obama, who was nominated for the Prize within 11 days of taking office, and ultimately won it for . . . what, exactly?

Does anyone recall CNN glorifying President Trump and his administration over the stunning success of the Abraham Accords? Or pointing out that President Trump achieved something in his one term that Barack Obama failed to do in his two terms? Me neither.

But let Joe Biden have one phone call with Vladimir Putin that apparently went well, and CNN unleashes a flood of accolades for the new president.

On this morning's New Day, CNN International correspondent Frederik Pleitgen promoted the Biden side of the call while insisting it wasn't "particularly friendly" in tone: 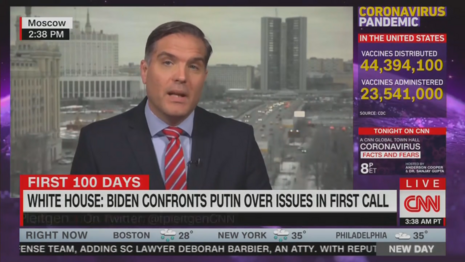 Gag me with a samovar! The spin was furious, since no fewer than five times in the course of the segment, CNN's man prefaced his characterizations of the call by saying, "certainly."

As evidence of the phone call's productivity, Pleitgen focused on Biden and Putin agreeing to extend the New START nuclear treaty, saying it was something the Trump administration couldn't achieve in its last days. But it's also something that Putin had wired long before the phone call, as evidenced by the fact, as Pleitgen reported, that Putin immediately rammed its ratification through both houses of the Russian parliament.

Pleitgen has a history of anti-Trump bias. In January 2020, we caught his report from Tehran on the US drone strike that killed Qasem Soleimani, the commander of Iran's Quds Force and considered the second-most powerful person in Iran. Pleitgen repeatedly claimed that the killing of Soleimani had "united" all Iran. As we wrote then [emphasis added]:

The height of absurdity came when Pleitgen cited "one gentleman who came up to me" and said that despite the problems in Iran, "now everybody is united."

Gee, Fred: you don't suppose that "gentleman" might have been an Iranian agent or lackey who had been gently encouraged to speak with a Western reporter? Whatever happened to journalistic skepticism?

Would CNN go to a Trump rally and just accept the first opinion of a "gentleman who came up to me" as America's unified opinion?

CNN slobbering over the Biden-Putin phone call was sponsored in part by WeatherTech and Noom.

ALISYN CAMEROTA: CNN's Frederik Pleitgen is live for us in Moscow. So what do they happened on this call.

FREDERIK PLEITGEN: [Chuckles] Hi, there, Alisyn. Well, certainly, neither of them said, the White House or the Kremlin said, this was a particularly friendly conversation. But they certainly did say that it was very matter-of-fact, and it certainly does seem to have been very productive. In fact, impressly productive.

Both men agreed to extend the New START nuclear treaty, and Vladimir Putin really followed through on that very quickly. Just moments after the readout came out, he sent that to Russian parliament. And just a couple of minutes before we went on the air right now, we just got confirmation that both houses of Russian parliament have actually ratified that extension.

So certainly, President Biden managed to do something that the Trump administration did not manage to do in the last days that it was in office. Nevertheless, the White House saying that while there were areas where there could be cooperation, that the White House would also take a very firm stance on other areas of concern. I want to listen in to what the White House press secretary had to say.

JEN PSAKI: His intention was also to make clear that the United States will act firmly in defense of our national interests and in response to maligned actions by Russia.

PLEITGEN: So there you have the US taking a firm stance. Some of those topics included, according to the White House readout, Ukraine, and Ukraine sovereignty. Remember, that was an issue where the Trump administration was always seen as not being very tough on Russia.

Then the Solar Winds hack. The possible bounties placed on American soldiers by Russians. That also discussed, as well. And then, of course, right now, the topic of the treatment of Alexei Navalny, his poisoning. The fact that he is in prison. Also the treatment of some of the protesters that are trying to get him out of jail. That was also discussed. The Kremlin acknowledged that and the Kremlin said, quote, that there was an explanation provided by the Russians.

So certainly, it really seems as though it’s a whole different way of going about these calls under the Biden administration than it was under the Trump administration. And it certainly does seem to have yielded some very early and very quick results, as well.