Morning Joe Troublemakers: Trump Might Urge Georgia Voters to Write Him in For Senate

Morning Joe is doing its best to deliver the Senate majority to the tender mercies of the Democrats by sowing fear, loathing, and mistrust among Republican voters in Georgia.

On today's show, Joe Scarborough and Kasie Hunt floated the latest Trump conspiracy theory: that it's "entirely possible" that when President Trump goes to Georgia—ostensibly to rally support for the Republican Senate candidates in the runoff elections—he will, in fact, tell voters "write me in."

Asserting that the presidential election in Georgia was rigged against him, President Trump has been critical of Georgia governor Brian Kemp and secretary of state Brad Raffensperger, Republicans both, for moving to certify the election results for Biden. Scarborough/Hunt's theory is that Trump might thus take his revenge by telling voters to write him in for Senate instead of supporting the Republican candidates.

The duo also suggested that Trump has so undermined the confidence of Republican voters in the honesty of Georgia's election system that they have become dispirited and won't bother to turn out for the run-offs. 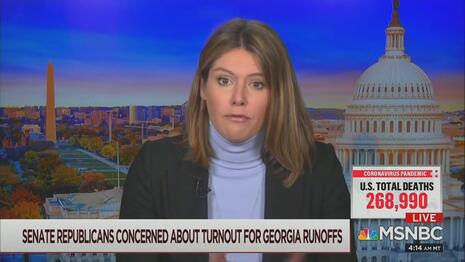 However, Morning Joe's warning runs headlong into President Trump's tweet, and reporting by Fox News and others, urging Georgia voters to support Loeffler and Perdue. Scarborough/Hunt's warning is in fact more of a fond wish, rather than anything based in reality.

In the 9 am hour, Scarborough returned to form in an interview with Chris Jansing, insisting "there's just an all-out Republican civil war in the Peach State."

Note: Hunt usually maintains a modicum of objectivity. But this morning she in effect said that Republicans deserve to be punished in Georgia, given that they have "stood by" and "ignored what [Trump] was doing" in the past.

Morning Joe's attempt to hand the Georgia Senate runoffs to Democrats was sponsored in part by USAA, Ensure, DoorDash and Chewy

JOE SCARBOROUGH: Kasie Hunt — let’s bring you in here. There’s no guarantee that Donald Trump's not going to go down to the state of Georgia and say these Georgia people are — these Georgia Republicans are worthless. Just write my name in as your senator.

And here you have the same woman who has claimed that in every other state, in every other election this year that Donald Trump has lost, the process has been rigged. But now she's saying, oh, yes, yes, all of those elections were rigged, but this one's not rigged, even though the President of the United States keeps saying that the election system in the state of Georgia is rigged. So, I mean, what are Republicans to do who want to win these last two seats?

KASIE HUNT: It’s an impossible situation, Joe. And in some ways it’s a fitting end to four years of Republicans who have essentially have — they have ceded this ground to Donald Trump.

I mean, they have stood by, said they didn’t see the tweets, ignored what he’s been doing. And now all of a sudden he’s on his way out. They really want to hang on to power. The only way to do it is for them to deal with that impossible divide that we have talked about there, in this anvil where these voters are Trump voters. And they have punished Republicans who have gone against Donald Trump. His base has.

But on the other hand, Trump has alienated a lot of the traditional Republicans in places like the Atlanta suburbs that these Republicans also need. And they somehow have to get both of these groups of people to both go to the polls, trust the system, and also vote for these Republican Senate candidates. And it’s becoming a completely impossible task.

And you’re absolutely right. In theory, there’s been this conversations about whether the president should go down there and campaign for them. Frankly, they need those people — those voters who showed up and were there to vote for Donald Trump who otherwise don’t vote in elections, or who are new voters, new to the process. They need those people if they’re going to get these two senators re-elected.

But at the same time, these are the people who are most receptive to that message that the president is sending. What if he goes down on the stage and says: don’t vote, it’s rigged? Write me in, as you say. I mean, it’s entirely possible.