'Ditzy' Mika on the Verge of a Morning Meltdown? 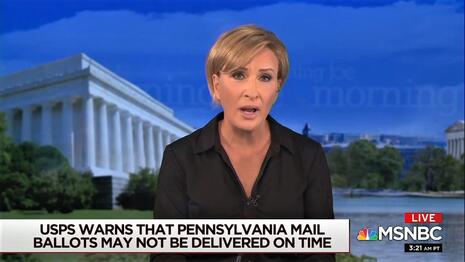 Mika Brzezinski recently expressed concern for husband Joe Scarborough's mental health -- asking him during the course of a show if he wanted a time-out to listen to favorite music to calm himself. She later ordered him to take a two-week break from Morning Joe, presumably to rest his frayed psyche.

Joe took Friday morning off, but hopefully he was watching and will return the concern for wife Mika. Because the poor woman seemed to be teetering on the verge. Her voice cracking at times, Brzezinski said that "everyone should be very, very worried."  An emotional Mika said "I beg" Republican leaders to speak out, warning that we are in danger of "losing our country." Mika ended her frantic spiel by wondering how much more information people need "to be as worried as I am!"

Mika, we are worried: about you!

The cause for Brzezinski's outburst was President Trump's comments on the impasse with Democrats over a bill that includes funding for the Post Office, and its ability to handle mail-in ballots.

Mika also mounted a lame response to President Trump tweeting about the ratings of "a complete Psycho named Joe Scarborough and his ditzy airhead wife, Mika". She twice managed to work that d-word into her opening comments, saying to the president in a stage whisper: "I know you watch." Mika also launched an ineffectual taunt, calling President Trump a "fraidy-cat." Oooh!

Mika's meltdown was sponsored in part by Choice Hotels and Discover.

MIKA BRZEZINSKI: Okay, here's the thing: it's the quiet part you're saying out loud, when you're trying to cheat. You know, using your whole corruption stuff that you do. [Stage-whispers] I know you watch. Do you think Americans are that ditzy? . . . But he's a fraidy-cat. He sees the polls. He's losing. And so he's going to finds a different way to win, which is basically to try and undermine the election itself by undermining the post office. By saying the results can't be counted. I just wonder: how ditzy and stupid does he think the American people are?

MIKA: Gene Robinson, calling money for the post office a liberal-left wish list, I mean, we’re not just talking about balloting and we are very worried about the election, and maybe more people on the left are than on the right, but I would think they would be worried, too. Donald Trump is doing a mail-in ballot! I’m assuming he’s voting for himself. Doesn’t he want it to get there?!

A lot of this doesn’t make sense, but if you’re watching Trump’s patterns, I would suggest everyone should be very, very worried. I beg Republican leaders to speak out. Andrea says they’re worried about losing the Senate, how about losing our country [odd laughter] as we know it?! You have to try and hold on to the actual function of voting in order to retain this democracy that this president clearly seems to be breaking down day by day by day, lie after lie after lie, coronavirus death, coronavirus death after coronavirus death, which he could have prevented.

PS: Tom Elliott at Grabien made a Supercut of all Mika's caterwauling on Friday: