If once is an aberration, twice is a trend. It now seems clear that the Democrat party is unwilling to stake out opposition to taking down statues to arguably history's greatest American: George Washington.

On Sunday, we caught Democrat senator and possible Biden VP pick Tammy Duckworth twice refusing to rule out taking down Washington statues. She instead suggested a "national dialogue" on the subject, arguing we should "listen to everybody . . . listen to the argument there."

On today's Morning Joe, it was the turn of Jaime Harrison, Lindsey Graham's Democrat opponent in the South Carolina US Senate race. Willie Geist pressed twice on Washington statues. Caught between his voters and the progressive base of national Democrats who could fund his campaign, Harrison equivocated on whether Washington statues and monuments should be dumped.

Geist told Harrison "there are those who say, even someone like George Washington or Thomas Jefferson, who owned slaves, doesn’t deserve to have his name on a school or have a statue to him. Do you believe those statues should come down?"

And similar to Duckworth's proposed "dialogue" on the matter, Harrison went mealy-mouthed and suggested "each community" should make its own "determination." That would undoubtedly lead to Washington statues coming down in some areas, but Harrison apparently would have no objection to it.

Harrison seemed to seek to sketch out a somewhat more non-committal stance than Duckworth, but wound up making matters worse. 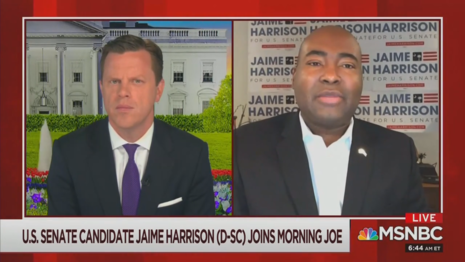 On the one hand, he said that the standard for taking down statues of presidents should "probably" be different from that applied to statues of Confederates. But he then suggested that Washington statues shouldn't come down  "until you start to change Washington DC and all." In other words, Harrison is apparently open to erasing Washington from the name of our nation's capital, too!

WILLIE GEIST: How do you see this debate playing out over the statues? Obviously, Confederate monument like that, and the man you just described [Ben Tillman] should not be standing on a pedestal as you said. But there’s been some discussion over the course of the last couple of weeks, and review of America’s history. And there are those who say, even someone like George Washington or Thomas Jefferson, who owned slaves, doesn’t deserve to have his name on a school or have a statue to him. Do you believe those statues should come down?

JAIME HARRISON: You know, I think each community is going to have to make a determination about what they see is what’s being a symbol for them and what they represent . . . In terms of the Confederate names on military bases, I think those things probably should be revisited. But in terms of, you know, presidents and all that, I think it has to be a different standard probably.

GEIST: And just to underline it, so you believe there should be a different standard for George Washington than a confederate leader?

HARRISON: Well, I think, I think all of that has to be in discussion. But I do believe there’s certain — I mean, until you start to change Washington DC and all, I think we just got to sit back and step back from the passions — and just evaluate whether or not that’s the right direction to go.