You might have thought it was surprising, shocking, perhaps even inappropriate, that retired military brass, particularly those like James Mattis who served as aides to President Trump, have spoken out in criticism of him.

You might also have thought that Trump-hater par excellence Nicolle Wallace would have been thrilled by their statements. But Wallace is apparently a tough person to please. On her MSNBC show this afternoon, Wallace expressed her "burning rage" that the military leaders didn't speak out sooner!

After MSNBC contributor Yamiche Alcindor said "some people think" that the brass is "speaking out too late," Wallace responded:

"I’m so glad you said that. You sort of popped the cork on my burning rage that they took so long to say this." 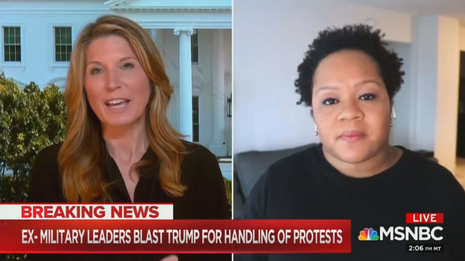 Wallace lamented that the military leaders didn't speak out during the Senate impeachment trial to say that President Trump lacked "the fitness for the office he holds."

PS: We certainly hope no one was injured when the cork on Nicolle's burning rage popped!

YAMICHE ALCINDOR: There are current and former generals who worked for President Trump all saying they're worried that America is turning into an authoritarian government. And it is very notable to hear them.

I will say, Nicolle, I was talking to a source in Florida today, and they said what took these generals so long? The country has been through so much. John Kelly oversaw at one point the separation of immigrant children from their families. There are also of course the president saying they were very fine people at a Nazi rally. Some people think that even though these generals are admirable for speaking out now, but they 're speaking out too

NICOLLE WALLACE: Yamiche, I’m so glad you said that. You sort of popped the cork on my burning rage that they took so long to say this. This president was impeached! And he stood in front of the Senate. There was an opportunity for Republicans to be persuaded to hear from a witness. Someone who saw, up close, exactly what General Mattis saw which was the president who lacks the maturity and I think Mattis's point, lacks the fitness for the office he holds.