How paranoid were the Nixon-hating TV networks during Watergate? Far enough out there that, according to liberal former ABC correspondent Carole Simpson, they feared that instead of resigning, President Nixon would announce a military coup supporting him.

Appearing on Joy Reid's MSNBC show AM Joy this morning, Simpson testified about the media conspiracy theories during Nixon's televised address to the nation of August 8, 1974, in which he announced his resignation:

CAROLE SIMPSON: I have to tell you, though, on the night he gave the resignation speech, I was a baby reporter then. But they had me out in Chicago, we were in major cities across America waiting for the riots or whatever that's going to happen after his announcement because people weren't sure that he wasn't -- the camera wouldn't pull back on Nixon and he’d be surrounded by the Joint Chiefs of Staff, saying he’s going to take over the government. The networks were really thinking something like that may happen."

Of course, back in the Watergate day, all of the TV networks were of a liberal bent, along with all leading newspapers other than the Wall Street Journal. And Simpson herself, as our Brent Baker has documented, has a long history—both as an ABC correspondent and later in her career—of pushing the liberal line. 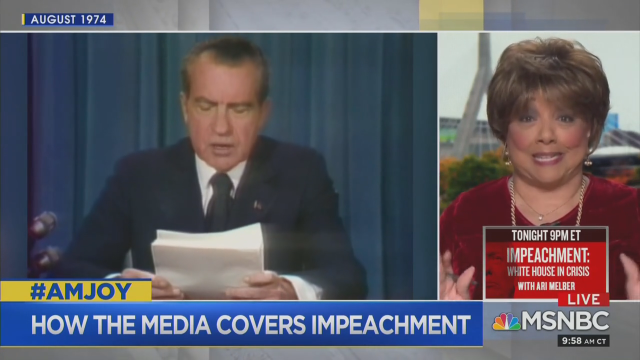 I don't understand what's happening in the country. [Laughter] You know, his approval ratings have gone up, support have done up, despite what we heard in two weeks of public hearings. So I don't know what's going on with the American people, but I have one suspicion, and I think it is Fox News. And the fact that most people are getting their news from Fox, and they believe Trump and Fox tell the truth, and the rest of us are enemies of the people. And it scares me that if people are just watching Fox, they have a completely skewed idea of what it is happening here. So it is very scary.