Morning Joe: Schiff 'in Some Trouble' for Not Telling Us Truth About Whistleblower

Let's give Morning Joe some modified credit. On today's show, Democrat House Intelligence Chair Adam Schiff was criticized for not telling the truth when Sam Stein asked him on the show's September 17th episode whether his committee had spoken with the whistleblower. Schiff denied it to Stein. In fact, the whistleblower had contacted the committee, and they spoke.

"I will say, this puts him in some trouble. He clearly wasn't being forthright in that interview with us a couple weeks ago. And he should have been."

So, credit for that. But Stein went on to downplay the significance of Schiff's untruth, saying that the substance of the whistleblower complaint is more important than the process by which it was made public. Stein also reported Schiff's excuse: 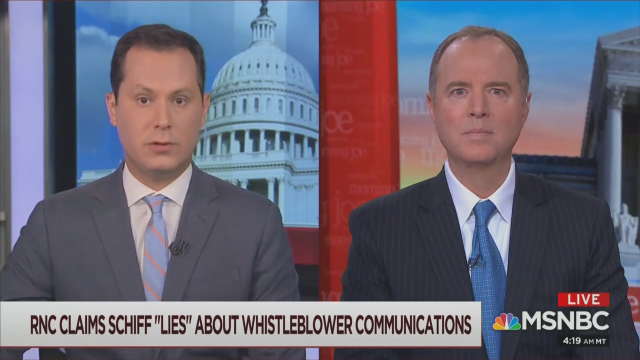 WILLIE GEIST: Sam Stein, I want to play a clip from this very show, September 17th. Chairman Schiff was on the show, and you asked him a question that has raised some eyebrows in the last 24 hours.

ADAM SCHIFF: We have not spoken directly with the whistleblower. We would like to.

STEIN: So, we talked for a couple minutes last night. He expressed regret for not having been more clear in his wording.

GEIST: What did he say?

He also was explaining that he was trying to compel the whistleblower to come testify before the committee when he was saying that, but, again, he expressed regret for what he said on the initial interview with Morning Joe, and said he should have been much more clear about it.

I will say this puts him in some — in some trouble. He clearly wasn’t being forthright in that interview with us a couple weeks ago and he should have been.

That being said, if you’re really bothered by the — what words Schiff said a couple weeks ago, and not the complaint or the fact that, for instance, Mike Pompeo claimed he wasn’t on the call and it turned out he was, then you’re being dishonest about this entire process. It’s the substance of the complaint that’s the story. The process by which the complaint became public is a story, and you can consider that in its own right, but in terms of gravity of the situation, I don’t think the process actually stands up all that well to the complaint itself.