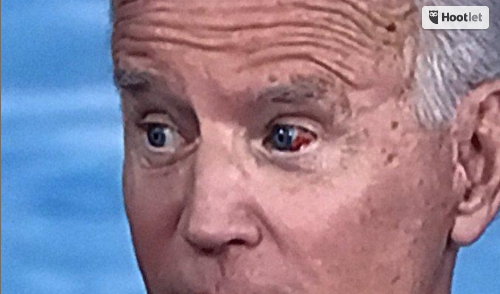 What was a newsworthy thing to come out of CNN's interminable climate town hall snoozarama last night? Surely not the details of the various candidates' plans to "save the planet." No, the most interesting thing was the way that Joe Biden's left eye filled with blood during his appearance. While it might not bear directly on his fitness for office, it certainly does play into the narrative questioning Biden's age, health history, etc.

If you're a Biden campaign aide, surely you groaned when it happened. And you braced yourself for media coverage, particularly by CNN, which hosted the event. But relax! CNN's got Biden's back, and that of all the Democrat candidates! At least during the three hours of New Day this morning, there was exactly . . . zero mention of Biden's bloody eye.

Is there any way to see this other than highly-partisan journalistic malpractice?

If the same thing had happened to President Trump, it would presumably have pushed even the Hurricane Dorian coverage off the front burner. "CNN Breaking News! Trump's bloody eye! Looming health crisis?!" Followed by a long segment with Dr. Sanjay Gupta discussing all the grim possibilities, a constitutional expert to discuss presidential succession, etc.!

But when you're a Democrat, CNN and the MSM at large do their bit to bury any potentially bad news.