Effete: affected, overrefined, and ineffectual; see "Chris Hayes."  OK, I appended the name of the MSNBC host to the dictionary definition.  But if ever you wanted to see the human embodiment of the adjective in action, have a look at the video from his MSNBC show this morning of the too-refined-by-half Hayes explaining why he is "uncomfortable" in calling America's fallen military members "heroes."

Hayes is worried that doing so is "rhetorically proximate" to justifications for more war.  Oh, the rhetorical proximity!  View the video after the jump. 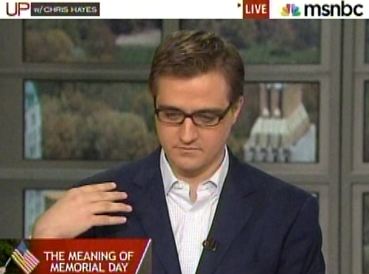 In fairness, Hayes and the other panel members distinguished between their respect for the valor of the individual military members who had given their lives with the worthiness of the various causes in which they fought.  Even so, what does it say about the liberal chattering class, which Hayes epitomizes, that it chokes on calling America's fallen what they rightly and surely are: heroes?  Watch the hesitant Hayes in what almost seems a parody of the conflicted intellectual.

CHRIS HAYES: Thinking today and observing Memorial Day, that'll be happening tomorrow.  Just talked with Lt. Col. Steve Burke, who was a casualty officer with the Marines and had to tell people [inaudible].  Um, I, I, ah, [Steve] Beck, sorry, um, I think it's interesting because I think it is very difficult to talk about the war dead and the fallen without invoking valor, without invoking the words "heroes." Um, and, ah, ah, why do I feel so comfortable [sic] about the word "hero"?  I feel comfortable, ah, uncomfortable, about the word because it seems to me that it is so rhetorically proximate to justifications for more war. Um, and, I don't want to obviously desecrate or disrespect memory of anyone that's fallen, and obviously there are individual circumstances in which there is genuine, tremendous heroism: hail of gunfire, rescuing fellow soldiers and things like that. But it seems to me that we marshal this word in a way that is problematic. But maybe I'm wrong about that.