Larry O'Donnell makes a living attacking Mormonism. We noted years ago how he lambasted the LDS church as "demented" and "ridiculous."  The MSNBC host was at it again tonight.

On this evening's Last Word, O'Donnell dismissed Mormonism as a religion "invented" by its founder, Joseph Smith, for purposes of excusing his infidelity.  O'Donnell sneeringly added that Mitt Romney "says his believes" in his religion. View the video after the jump. 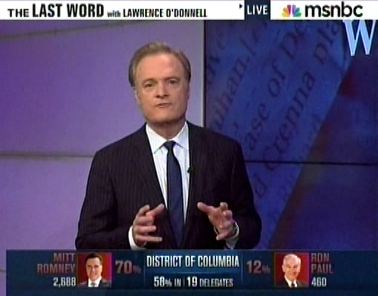 Watch the "progressive" O'Donnell's intolerance on display. Think he's ever treat the religion of, say, a Muslim candidate in such demeaning terms?

LARRY O'DONNELL: Now part of Romney's religion problem is that he's a part of a new religion. Established religions like Judaism, which is about 4,000 years old, and Christianity, which is about 2,000 years old, don't easily warm up to new religions like Romney's, which is only 182 years old. Mormonism was created by a guy in upstate New York in 1830 when he got caught having sex with the maid and explained to his wife that God told him to do it.  Forty-eight wives later, Joseph Smith's lifestyle was completely sanctified in the religion he invented to go with it.  Which Mitt Romney says he believes.