To the list of sports scribes who should supposedly be concerned with balls and strikes but instead use their gigs as platforms to let their liberal flags fly, add Fred Roggin, who does a regular sports spot on Morning Joe.

On today's show, Roggin's report on Rush Limbaugh's effort to acquire an interest in the NFL's St. Louis Rams was one long lambasting of Limbaugh that included this glaring misstatement of fact: that Rush was "canned from ESPN for racist remarks about Eagle's quarterback Donovan McNabb."

To see how wrong Roggin was, let's go to the videotape, or at least the transcript.  Here's what Rush said back in 2003 about McNabb:

"I think what we've had here is a little social concern in the NFL. The media has been very desirous that a black quarterback do well. There is a little hope invested in McNabb, and he got a lot of credit for the performance of this team that he didn't deserve. The defense carried this team."

People can debate the accuracy of Rush's assessment [though it's interesting that even a columnist at the liberal Slate wrote at the time that Rush was right].  But there's no denying that there was absolutely nothing racist about Rush's remark.  He was simply saying that the liberal media had, for its own political purposes, overrated McNabb.

Roggin's inaccurate shot about Rush's departure from ESPN [from which he resigned rather than being "canned," by the way], was far from the only jibe Roggin aimed Rush's way.

FRED ROGGIN:  All right, Al Davis, step aside.  Jerry Jones, you too.  The NFL could soon have a new owner the fans love to hate --

"The fans" would love to hate Rush?  If Rush does become an owner, there will be millions of fans who like and love Rush who will suddenly start rooting for the Rams.

Interested in purchasing the team back in May.  From a buy-low-sell-high standpoint, it's a no-brainer.  The Rams are the worst team in the league.  Many think that Limbaugh is a horrible man.  So it's only fitting he buys a horrible team.

I'll say. Why doesn't Roggin go back to reporting the scores and leave the political opining to Joe and Mika? 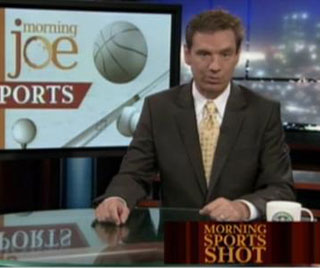