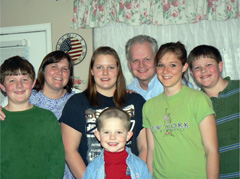 In the social circles of the New York Times editorialists, it's OK to have one kid. Two is pushing the envelope. Three or more is déclassé, and a threat to the survival of the planet.

That being so, there's really no reason to let any car bigger than a Prius be built.  Doing so just encourages the unenlightened to overbreed. And so it is that in its editorial of today, the Grey-but-barren Lady suggests that as a condition of the Detroit bailout, "Congress could consider demanding that Detroit simply phase out S.U.V.’s and vans by a certain date."

Great idea.  Let the Mormons and others who take that "be fruitful and multiply" stuff seriously, like Hasidic Jews, walk to Wal-Mart or wherever else those kind of people go.  Lincoln Center is right down the block.  Frankly, we don't see the need for cars at all.

Update: Check Out The Hatch Family in Their SUV!

Jenny Hatch, of the Hatch family pictured here, has written to say:

We went to Utah last week and packed the kids in the car.  Tight squeeze, but we made it.  If we had a Prius, I guess we could have duck taped a few of the boys to the roof for the eleven hour car ride to Utah.

View a brief clip of the Hatch Family in their SUV here.