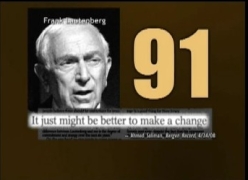 In a political season in which Barack Obama has delighted in playing the age card—see "lost his bearings," "wander around," and multiple mentions of McCain's "half-century of service," Democrats are now demonstrating that they're even willing to use an opponent's superannuation on each other.

There I was in my upstate NY home this evening, innocently watching the Yankee game, when this ad by Dem Rob Andrews, targeting primary opponent Dem Frank Lautenberg, the–very–senior senator from New Jersey, appeared . . .

VOICEOVER: 1982, one of the low points in New Jersy political history. Frank Lautenberg bases his campaign against Millicent Fenwick on her age. She's 72! Using not-so-veiled language, Lautenberg actually says it's OK for a man to make fun of a woman's age. Now, Lautenberg will be 91 at the end of his term. 91. Newspapers have said it's time for a change. It's hard when your own words come back to haunt you, isn't it, Mr. Lautenberg?

Note: Might Andrews have calculated he'd be largely insulated from MSM criticism of his tactic since the media wouldn't want to set a precedent that could be used against Obama?

Aside: The ad is so nasty that when on first seeing it, I just assumed Andrews was a Republican. Not that they're more, uh, mean-spirited than Dems, but I couldn't imagine an intra-party ad being this harsh. And so, blithely, I wrote the first version of this item on that assumption, only to have my mistake pointed out by readers. They play rough, those Dems, even amongst themselves.