Matthews: 'I Want To Be a Senator'

Stephen Colbert called it "an announcement." Chris Matthews went on the Comedy Central show last night and, responding to the host's importuning to declare his candidacy for US Senator from Pennsylvania, ultimately stated: "I want to be a senator."

Over on MSNBC, Morning Joe played a clip of their colleague's appearance, then chewed it over.

STEPHEN COLBERT: There's a lot of talk that you might be running for Arlen Specter's seat. 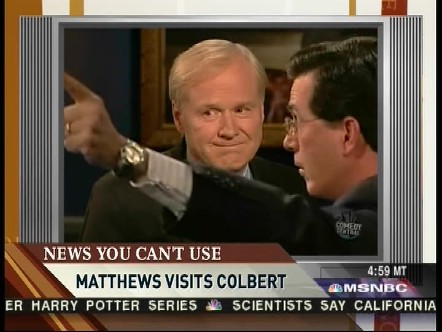 COLBERT: In Pennsylvania. Any truth to that?

MATTHEWS: For United States Senate? In the year 2010?

COLBERT: That's the last I've heard on it. You want to give me a scoop? You want to respond to that in the form of an announcement into that camera right over there?

MATTHEWS: Representing all the people of Pennsylvania?

COLBERT: The great state of Pennsylvania. You're a favorite son of Pennsylvania. I know what that's like. Make an announcement, Chris: right in that camera! [Gesturing to the audience] Will you vote for him if he says it now? Chris? Let's play Hardball!

Matthews, sitting somber-faced, did nothing to deny it.

Back at the Morning Joe studio, the panel dug the idea.

JOE SCARBOROUGH: Yah, he always has. He's always, I think, wanted to do that. So, I think he'd be a great politician.

GEIST: No question about it.

MIKA BRZEZINSKI: Oh my gosh; I would love to see that. He has to do Hardball too, though. I would not let him leave the show.

SCARBOROUGH: Now there's a guy who understands the blue-collar voters.

BRZEZINSKI: Yes he does.

SCARBOROUGH: He wouldn't pick up a bowling ball unless he knew he could break 200.

GEIST: Chris Matthews would be great on the stump, too, wouldn't he?

SCARBOROUGH: It's exciting. We need to get him on and interview him.

BRZEZINSKI: Let's have him on tomorrow.

SCARBOROUGH: OK, we'll do that.

As we've noted before, it really does look like Matthews is seriously exploring the possibility of a run. Which raises an interesting issue. Mika might want him to simultaneously seek a Senate seat while serving as Hardball host, but how much longer can he continue to do both? At what point does Matthews' journalistic status become hopelessly jumbled by his political ambitions?

I've already noted how Matthews buttered up PA Gov. Ed Rendell during a recent Hardball appearance. It later emerged that Matthews had previously approached Rendell looking for help in recruiting a campaign team. On last night's Hardball, Matthews assembled a panel of Pennnsylvania Dem county chairmen to kibitz the primary. Justifiable, but how convenient for Chris, who ended the segment with an anything-but-Hardball send-off, telling the pols what "a great honor" it had been to have them on the show.
Campaigns & Elections MSNBC Hardball Comedy Central Colbert Report Morning Joe Video Stephen Colbert Mika Brzezinski Willie Geist