Hillary: Forgetful at 11, Fierce at 3

Must be something about midnight. Sometime between 11 PM and 3 AM, Hillary Clinton is transformed from a sleepy sexagenarian who can't keep her facts straight into a bold Commander-in-Chief dealing decisively with the crisis of the moment.

We all know about Hillary's 3 AM mastery. As for 11 PM, Bill Clinton went on the campaign trail in Indiana yesterday and chalked up his wife's problems with the truth of Tuzla to the senior moments that afflict people of her age at that time of night.

Morning Joe has been having an absolute field day today with Bill's fibs on the matter, repeatedly playing clips of him out on the stump yesterday. How can a politician tell he's gone too far in twisting the truth? When Willie Geist, normally averse to plunging into the political fray, faults a pol for telling "so many lies" about something, as Willie did this morning about Bill's whoppers. Joe Scarborough branded Bill a "runaway beer truck."

Here's a transcript of Clinton's comments in the Hoosier State yesterday. See if you can count the number of misstatements he managed to cram into a a couple short soundbites that Morning Joe edited together.

BILL CLINTON: Some of you may have seen it. She took a terrible beating in the press for a few days, cause she was exhausted at 11 o'clock at night and she started talking about Bosnia, and she misstated the circumstances under which she landed in Bosnia. Did y'all see all that? And, oh, they acted like she, you know, she was practically Mata Hari, you know, just making up all this stuff . . . Hillary one time, late at night, misstated and immediately apologized for it, what happened to her in Bosnia in 1995. Did y'all see all that? Oh, they blew it up, and you would have thought, you know, that she robbed a bank, the way they all carried on about this. And some of them when they're 60, they'll forget something when they're tired at 11 o'clock at night, too. 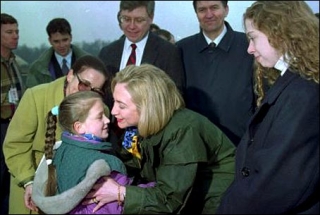 So . . . shall we count the ways Bill twisted the truth?

Note: Matt Lauer raised the matter with guest Chris Matthews on this morning's Today show. But at least in the first half-hour, neither The Early Show nor GMA saw fit to mention Bill's tangles with the truth

Also, while Morning Joe didn't roll that part of Clinton's stump remarks in Indiana, he also said " I think she was the first first lady since Eleanor Roosevelt to go into a combat zone." Wrong again. How did Bill miss the frequent press mentions over the last couple weeks of the fact that Pat Nixon went to Vietnam in 1969?