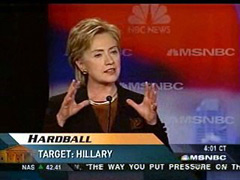 "The Clintons have a reputation of being slippery and hard to pin down. Last night Clinton underscored that on the issue of whether illegal immigrants should have drivers licenses." -- David Shuster, "Hardball," 10-31-07

Was that really David Shuster? Or could Shuster, like opera singer Enrico Pallazzo in "Naked Gun," have been tied up in a dressing room as a Halloween impostor echoed George H.W.'s 1992 characterization of the Clintons? Be that as it may, on this afternoon's "Hardball" someone looking like the normally Dem-friendly Shuster did indeed accuse Hillary of underscoring her slippery reputation with her drivers-license debate dodge.

CHRIS MATTHEWS: What do you make of Hillary's proposal that we hand out drivers licenses to people as they pass under the fence at the Mexican border?

Pat was only too happy to devour the tasty morsel.

PAT BUCHANAN: I think the drivers license and her re-endorsement of the amnesty bill, Chris, that is something that is long-lasting because that is the one domestic issue, it is powerful, it is emotional, it has reach among working Americans, Democrats, independents as well as Republicans. That's one issue that could turn a presidential election. I think that's the one issue rather than the [presidential papers] that could really hurt Hillary in the general election.

A bit later, speaking with the Politico's Roger Simon, Matthews hit Hillary on the PC euphemism she employed in discussing the drivers license issue.

CHRIS MATTHEWS: Roger, it seems to me that she uses this phrase, "undocumented workers," rather than "illegal immigrants." It's obviously pandering; it doesn't tell you anything. "Undocumented worker" could mean anything. She doesn't use the language of reality. These people are in the country illegally.

What's going on here? Could this truly be some kind of watershed moment in the Dem primary campaign, as Matthews suggested at the top of the show? Or is it just the MSM trying to inject some drama -- attracting viewers along the way -- into what otherwise might be a Hillary cakewalk to the nomination?

Update | 8:00 PM -- Obama agrees with Hillary: One person who won't be in a position to exploit Hillary's gaffe is Barack Obama. He agrees with her position on doling out drivers licenses to illegals. Chief Obama advisor David Axelrod appeared later on Hardball.

DAVID AXELROD: He answered that question last night, Chris. He said that he did support that as a public safety measure.

Question to NB readers: which Republican is in the best position to differentiate himself from Hillary on this issue?