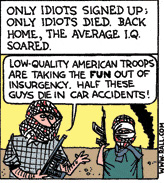 I don't normally follow Ted Rall's work. But when J.M., a member of our military serving in Iraq, wrote NB about Rall's recent column and cartoon, I had a look. I'd say our soldier was being restrained in describing Rall's work as "particularly offensive."

I'm displaying one panel from his cartoon of October 22nd. You can view the whole of it here. As you'll note, the point is to celebrate the death of our soldiers, since they are "idiots" whose removal from the gene pool causes the average IQ back home to soar.

His column of October 23rd, "HEY, SOLDIERS: QUIT WHINING!", which you can read here, contains these nuggets:

And then, this [emphasis added]:

Few Gold Star mothers tell [Pres. Bush] off. Those who do are polite to the man who murdered their children as surely and as viciously as if he'd shot them himself. Why don't they spit at him?

There really are no words, but let me try: Ted Rall is a despicable, unpatriotic, ghoul.

Note: Rall's repulsiveness is of course nothing new. Have a look, for example, at Michelle Malkin's take on a cartoon in which Rall used an N-word about Condi Rice.