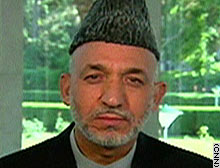 While Democrats and the MSM have revelled in stressing the tough sledding in Iraq, they had been constrained to acknowledge that the mission in Afghanistan - from the overthrow of the Taliban to the fostering of democracy leading to the election of President Karzai to efforts aimed at rebuilding a country mired in medieval poverty - has been largely successful.

But in recent weeks, Democrats and the MSM have sought to paint a more negative portrait of the situation in Afghanistan, culminating in an article in the October 2nd edition of Newsweek "The Rise of Jihadistan."

The article's sub-title states its thesis in these terms: "Five years after the Afghan invasion, the Taliban are fighting back hard, carving out a sanctuary where they—and Al Qaeda's leaders—can operate freely." And in his famously finger-pointing interview with Fox's Chris Wallace, Bill Clinton claimed that "if I were still president, we'd have more than 20,000 troops there trying to kill [Bin Laden]."

Now it's the Defense Department's turn to "fight back hard." A Pentagon official has offered this rebuttal of a number of Newsweek's most serious allegations.

NEWSWEEK CLAIM: "The 2003 invasion of Iraq did more than divert essential resources from Afghanistan; it created a test lab for new insurgent weapons and tactics that have since been adopted by the Taliban."

PENTAGON RESPONSE: Resources to Afghanistan have increased since Operation Iraqi Freedom began. In March 2003, the U.S. had about 9,500 troops in Afghanistan. Today, there are more than 21,000 U.S. forces either in Afghanistan or directly supporting missions there. This is in addition to the ongoing reconstruction efforts that continue to build infrastructure.

NEWSWEEK CLAIM: "Five years after the Afghan invasion, the Taliban are fighting back hard, carving out a sanctuary where they -- and Al Qaeda's leaders -- can operate freely. Al Qaeda or other terrorist groups now have a place from which to hatch the next 9/11."

PENTAGON RESPONSE: This assertion is contradicted within the same article by Lt. Gen. Karl Eikenberry, Commander, Combined Forces Command - Afghanistan. He points out that al-Qaeda or its successors have nothing like the liberty that allowed them to plot September 11 in the open. He states, "They have no safe haven inside Afghanistan that if we find it, we will not strike against them." It is one thing for al-Qaeda remnants to operate within Afghanistan's borders while being vigorously pursued and attacked by Afghan, NATO, and Coalition forces -- as is happening now. It is quite another thing for a terrorist organization to have an entire nation where they can plan, train, and launch attacks with impunity -- as Osama bin Laden and al-Qaeda did in Afghanistan before September 11. There is simply no comparison between the situation in Afghanistan when 9-11 was "hatched" to the situation today.

NEWSWEEK CLAIM: "Washington pushed Musharraf to crack down on the never-tamed Afghan borderlands, but fierce tribal resistance led to a formal deal letting the Taliban retain their bases there."

PENTAGON RESPONSE: According to Pakistan's President Musharraf, the agreement with tribal leaders had "bottom lines" that were non-negotiable. In his words, the agreement requires: "No al-Qaeda activity," and "no Taliban activity in our tribal agency or across [the border] in Afghanistan."

NEWSWEEK CLAIM: "As doubts rise over Bush's global aims, NATO is hard put to find the troops it needs for the mission."

PENTAGON RESPONSE: At nearly 20,000 troops, the NATO mission is the strongest it has ever been, and Alliance forces have been directly taking the fight to the enemy in southern Afghanistan. Just last week, NATO announced that the International Security Assistance Force would take over security operations in the eastern part of Afghanistan, bringing more than 12,000 U.S. troops under NATO command. At the recent NATO ministerial in Slovenia, Poland pledged 1,000 additional troops to support ISAF.

NEWSWEEK CLAIM: "In the countryside over the past year Taliban guerrillas have filled a power vacuum that had been created by the relatively light NATO and U.S. military footprint of some 40,000 soldiers, and by the weakness of Afghan President Hamid Karzai's administration."

PENTAGON RESPONSE: Qari Mohammed Yousaf Ahmadi, generally viewed as the Taliban's current chief spokesman, stated publicly on Sept. 15th, "The Taliban forces have conducted a tactical retreat." It is difficult to fill a power vacuum if your forces are retreating.

NEWSWEEK CLAIM: "But the harsh truth is that five years after the U.S. invasion on Oct. 7, 2001, most of the good news is confined to Kabul, with its choking rush-hour traffic jams, a construction boom and a handful of air-conditioned shopping malls. Much of the rest of Afghanistan appears to be failing again."

PENTAGON RESPONSE: Afghanistan was -- and is -- one of the poorest country's on the face of the earth. It will take years of hard work by the Afghan people and the international community to reverse the effects of decades of occupation and civil war. Improvements are not confined to Kabul, though it is true that much of the development and growth has been in larger cities, such as Kabul, Herat, and the northern city of Mazar-e-Sharif. Nonetheless, there has been a significant economic growth and donor efforts to improve living conditions across the country. Some examples:

No one anywhere near the American mainstream can dispute that going into Afghanistan to topple the al-Qaeda -harboring Taliban was necessary. And no one even vaguely familiar with that destitute, warlord-ridden region of the world could fail to understand that bringing a semblance of peace and prosperity to the country would be a long-term project fraught with difficulty. That won't prevent the MSM from accentuating the negative. But it does put their carping in context as the American military and dedicated civilians continue their work.