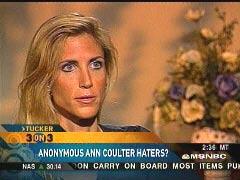 Let's play one of our favorite games: WIACHSI, which of course stands for "What If a Conservative Had Said It?"

Ready? OK, let's play. What if a conservative attacked a female liberal icon by calling her promiscuous? How many Dem pols, NOW leaders, assorted Naomi Wolfs of the world . . . and Air America hosts would be popping up all over the MSM to proclaim their outrage?

And yet, on today's edition of Tucker Carlson, Air America host and class-action trial lawyer [nice two-fer!] Mike Papantonio leveled the loose-woman charge at none other than Ann Coulter.

The subject was a new book, "I Hate Ann Coulter", written by four authors who have chosen to remain anonymous out of their supposed fear of "gun-toting abortion-clinic bombing, self-proclaimed wing nuts who follow Coulter." 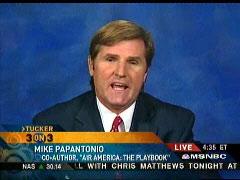 Asked to comment on the authors preference for anonymity, Papantonio instead uttered this slanderous non sequitur:

"To really understand Ann Coulter you have to focus on the fact that this is a woman who has never had a relationship with another person that has lasted longer than the gestation period of a fruit fly."

Papantonio then claimed that Coulter "has invited this discussion," but Carlson made it clear he would brook no further discussion of Ann's private life, and that put an end to matters. Let's remember this one the next time an MSMer accuses conservatives of being hate-filled, sex-obsessed, puritanical or misogynistic. Oh - by the way - what are the odds that a liberal feminist will pipe up to say that while she might disagree with Ann on the issues, she condemns Papantonio's slur?