You Say You Want a Revolution: Olbermann Invokes Right to Overthrow Government 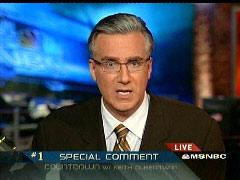 In the course of the last few weeks Keith Olbermann's "Special Comments" have become a Countdown staple in which the host plays to his Daily Kos demographic with vitriolic condemnations of all things Bush. I thought Olbermann had reached the nec plus ultra of nastiness with his suggestion a couple weeks ago that the Bush administration represented "a new type of fascism."  I might have been wrong.  MRC's Brad Wilmouth has comprehensively documented Keith Olbermann's 'Special Comment' of last night.  In the course of those comments, Olbermann chose to invoke, of all things, the people's right to overthrow a tyrannical government.

The object of Olbermann's ire was President Bush's response to a press conference question alluding to Colin Powell's statement that the US is danger of losing its moral leadership in the world.

Said the president: "It's unacceptable to think that there's any kind of comparison between the behavior of the United States of America and the action of Islamic extremists who kill innocent women and children to achieve an objective."

Not the most elegant turn of phrase, but what the president meant - and did not mean - seems clear.  Substitute "It is unthinkable" or "unimaginable" for "unacceptable" and you've got it. Only someone churlishly trying to twist W's words for partisan gain would suggest that the president was seeking to outlaw dissent.  The best proof is that, night after night, Olbermann obviously feels free to go on his show and utter his over-the-top condemnations of Pres. Bush.  And rather than goverment sanction, all he gets in response is more netroot adulation. But those facts didn't stop Olbermann from seizing on the line to suggest that the Bush administration had become the thought police, and for the MSNBC host to melodramatically muse "what next will be said to, or about, anyone who disagrees? Or what will next be done to them?"

Olbermann tried to imagine the president's response to language even more provocative than that of Powell's.  And of all things, he came up with an excerpt from the Declaration of Independence, written by Thomas Jefferson, recognizing the people's right to rebel: "Governments are instituted among men, deriving their just powers from the consent of the governed. That whenever any form of government becomes destructive of these ends, it is the right of the people to alter or to abolish it, and to institute new government."

Olbermann didn't call on the Kosmonauts, netrooters and assorted Moveoners of the world to take to the barricades today. But with an entire universe of provocative statements from which to draw for his hypothetical, Olbermann chose the one invoking the people's right to rebel and overthrow an oppressive government.  Let's say he put revolution in the air. To do so in response to the president's polite demurral to the words of his former Secretary of State says much more about Olbermann's hyper-partisanship than anything about an imagined threat to the right of dissent in our country.