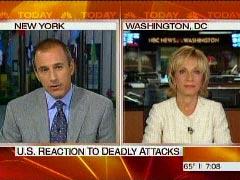 Israel might be defending itself on two fronts this morning, but that might not be enough. The Today show was attacking on at least three. And in a brief-but-telling moment, Andrea Mitchell gave away the blame-Israel game with a spontaneous shake of the head.

Here's the gist of Today's reporting: 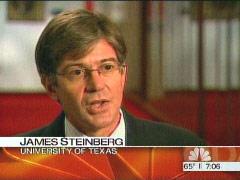 Here are the details. After a report from Richard Engel on the ground in Lebanon, Matt Lauer interviewed Andrea Mitchell. Claimed Mitchell:

"Diplomatic sources say Israel was waiting for a pretext to clean out Hezbollah strongholds in Lebanaon that have been firing rockets into northern Israel. But the European Union called Israel's response disproportionate and only the US voted to veto a UN resolution to condemning Israel's Gaza incursion. Instead, the administration is focusing on Syria and Iran's role in the crisis."

That's when Mitchell passed along criticism that the US should have sent a higher-level envoy sooner. To bolster her argument, she played a clip of one James Steinberg, who blistered as 'inexplicable' the administration's failure to be more directly involved. The screen graphic identified Steinberg by his University of Texas affiliation. But a quick Googling reveals that he was the Deputy National Security Advisor . . . in the Clinton administration. Truth in packaging, Andrea?

Mitchell passed along more criticism of US policy: "The administration has given Israel a green light to go after Hezbollah and Hamas. The concern though is that events could spiral out of control." Andrea, have you considered the dangers if Israel doesn't go after the terror groups?

That's when Matt took his shot: "How much of the US response now is dictated by a lack of clout in that region following the war in Iraq?"

Echoing a theme that, as Brent Baker has chronicled, she sounded on last evening's NBC Nightly News, Mitchell responded: "That certainly is part of the problem, with the US spread so thin in Iraq, Afghanistan and the continuing nuclear stalemate with Iran." Mitchell spun the domestic criticism of the Bush administration as bi-partisan but the only Republican critic she could identify was Nebraska Sen. Chuck Hagel. Does that count?

When you want to criticize Bush foreign policy, what better source than Madame Secretary herself, and sure enough Lauer quoted Madeleine Albright to the effect that crises around the world have produced 'a perfect storm.' Springboarded Matt: "Is there a sense in the diplomatic world that the administration's a bit overwhelmed?" 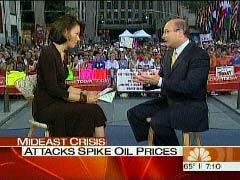 Mitchell: "There is a sense the administration has not focused on the Israel/Palestinian issue," and that everything else hinges on that.

Responding to Lauer's question as to how far the US would go in backing Israel, Mitchell stated: "This is a fragile situation. It could really undermine this fledging democracy in Lebanon which the U.S. Is trying to point to as a show place for the Middle East."

The view of Lebanon as a fragile, fledging democracy is widely-accepted. However, when I interviewed Jed Babbin - former Deputy Undersecretary of Defense in the Bush, Sr. admin - on my TV show 'Right Angle' last evening, he offered another perspective on Lebanon. Babbin, author of a book warning of a likely war with China, pointed out the Hezbollah terror group is an official part of of the Lebanese government. In Babbin's view, it is more accurate to think of Lebanon as akin to the Hamas-dominated Palestinian Authority.

An aside: at one point during the Lauer/Mitchell exchange, Matt passed along breaking news that Israel had again bombed the Beirut airport. Andrea responded spontaneously with a brief-but-disapproving shake of the head.

Today wasted no time in bringing the conflict to the home front, tying it to a favorite recurring theme, high gas prices. Interviewing market reporter Ron Insana, Ann Curry could barely contain her glee in speculating about "$80, $90, $100/barrel" crude oil. Curry seemed disappointed when Insana suggested it would take Iran's entry into the conflict to really send oil prices soaring. "Would it take that to get to $100/barrel?", she asked.

Come on, Ron, give us some apocalypse now!