Brewer on MSNBC: 'Politicians Trying to Skew This' 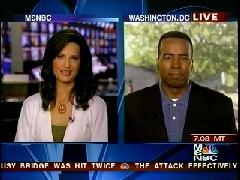 Shortly after 9:00 this morning, MSNBC anchor Contessa Brewer introduced a report on the potential political ramifications of plot that was foiled by the British yesterday. Her introduction was questionable, but not necessarily offensive:

Here we are, a day after this plot's uncovered, and already the focus has turned to politics, and who gets the credit for this terror bust, and was it the US War on Terror?

MSNBC reporter Kevin Corke then reported from Texas. He had some political analysis, all of which was fairly straightforward and non-controversial. He reported on the President's comments from yesterday, and the fact that he's been in pretty constant contact with British Prime Minister Tony Blair. At no point during the report did he report on the President doing, or quote the President, or any member of his administration saying, anything that could be construed as a partisan political statement. Nothing. It was a straight news report, and everything that was reportedly said or done was related strictly to the arrests and the ongoing war.

Contessa's takeout from the report?

So you know all those politicians out there are trying to skew this to their advantage, any way they can.

Absurd. Just ridiculous. The comment, clearly impugning the President, as he's the only politician being talked about, had no relation whatsoever to the news report it followed. It was completely out-of-place, and really offensively anti-Bush, given the context and manner in which it was presented. The entire clip can be seen here. It runs 2 minutes and 35 seconds.