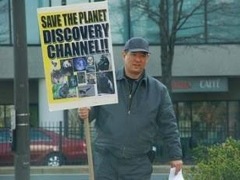 UPDATE: Lee was arrested in 2003 for smuggling illegal immigrants INTO the country! Details below the fold.

Police just raided the Discovery Channel headquarters, where a man had taken hostages, and was apparently demanding that the channel air radical environmental propaganda. The man, James Jay Lee, pictured right, was reportedly shot and killed.

Though most of the details remain unclear, one fact is quickly coming into sharp focus: the left will be working overtime in the next few days to spin this event any way they can. It began with this astoundingly dishonest Think Progress headline: "Purported Eco-Terrorist Angered Over ‘Immigration Pollution And Anchor Baby Filth'"

That's right, of Lee's thousand-word manifesto in which he stated his demands of Discovery, Think Progress chose to highlight not the radical, militant environmentalism he espoused, but rather an obscure claim (in terms of overall message and word count) that immigrants to developed nations make the pollution situation worse.

Notably, Think Progress thought it was worth comparing Lee's position on this single issue to other groups that have made similar claims, but did not see fit to liken him groups of environmental activists who also think overpopulation is the problem (Tom Friedman, please call your office). Lee also said war was bad for the environment. Will Think Progress condemn anti-war groups that make similar claims?

Conservative bloggers predicted this line of attack since before it even emerged. Patterico pontificated: "They'll find a way to label him a right-winger - or at least a Tea Partier. Somehow." Indeed. Ace chimed in with his prediction: "You know how the media will report this, right? That's right: Anti-immigration extremist." Give the man a cigar.

But while it's hardly a surprise that the far-left is spinning the story as hard as they can, the question remains: will liberal journalists who often rip stories from Think Progress repeat this bogus line?

Will even the mainstream media pick up on this blatantly dishonest meme, and play up the immigration aspect while ignoring the larger message of environmental extremism?

For the media, the event is a bit of a role-reversal. Journalists who purported that militias or other perpetrators or advocates of violence against the government were products of a conservative/libertarian attitude embodied by the Tea Party movement are now put in the awkward position of having to apply that same logic to Lee and his radical environmentalism.

By the same line of argument, pundits who relentlessly push the notion that human beings are responsible for the impending apocalypse due to their refusal to moderate their population or change their lifestyles are responsible, at least in part, for today's violence.

The media may also choose to simply ignore the environmental aspect and focus on his immigration views, employing the same logic it has used to condemn the Tea Party movement. We will see.

You can help NB monitor media coverage of the situation. If you think you see bias at work, leave a note and link in the comments.

James Lee, the bomb-laden gunman who was killed by police in the lobby of the Discovery Channel, was once convicted and imprisoned for smuggling illegal immigrants into the country from Mexico.

The revelation that Lee had once smuggled illegals contrasts sharply with a hate-filled manifesto he left behind in which he describes illegal immigrants as "disgusting filth" and their children as "anchor baby filth."...

"For one brief moment in my whole worthless life I felt good about myself. I felt like I was really helping people. I have never saved a person's life, but it felt the same as I imagine it would have felt... For once my life seemed to actually benefit the lives of others," he wrote to the judge.

Lee was arrested trying to smuggle a woman in a concealed compartment of his car through the San Ysidro border crossing in southern California and was sentenced to 18 months in prison, according to court documents. He later said he was ashamed of his people smuggling.

So much for that lefty meme. Don't expect a clarification from Think Progress, though.

Also worth noting, as Ace points out, that "according to ABC, anti-immigrant extremism seems to be his only motive. Not a mention of eco-extremism. Predictable."