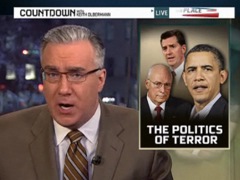 Sometimes being such fans of President Obama makes liberal media types tie themselves into knots.  As I documented earlier today, the New York Times went to great lengths to insist America's rising debt is not the administration's fault.

MSNBC ranter Keith Olbermann decided to try his hand at the absurd apologetics Tuesday by concocting a wild vision of intelligence officials who care nothing about the country's safety, and only about their bureaucratic "turf."

According to Olbermann, this quasi-conspiracy theory is a possible explanation for how Umar Farouk Abdulmutallab was able to board a plane bound for Detroit. (video and transcript below the fold - h/t Hot Air's Allahpundit).

OLBERMANN: ...are people thought to have been deliberately withholding information so that the dots could not be connected?

WOLFF: The question is, was this information that was shared -- remember, there was some sharing of information but it involves the father of this in the end terrorist who walks in to see the CIA officials in a foreign embassy. This is an american embassy in a foreign country. You know, that information, was it shared fully? Why wasn't it shared fully? The question there is, again, cork up or conspiracy? Was there a reason these agencies were at war with each other that prevented that intelligence from being shared?

OLBERMANN: Is the implication there that there is at least a possibility somebody understood how serious this could be and yet withheld information to make some other part of the counterterrorism system look bad?

WOLFF: That has got to be an area that the white house is looking into and, you know, motives can be hard to assess because it's not clear that this person was easily identified as a terrorist, even with the father coming forward saying they had concerns. Was that more of a family concern or were there enough fingerprints here about the radicalization of this individual to suggest that it should have been taken to a different level? At the very least, a security level beyond more than a nominal sharing of information. That's where this inquiry is, this internal inquiry for the moment, has to go.

OLBERMANN: Well, certainly, not to get too far ahead of what the information the white house doesn't have and presumably thus you don't have and certainly I don't have, but that seems to be what you're describing at least in theory is a far greater threat than a guy with explosives on an airplane whether or not he succeeds in blowing them up.

WOLFF: Well, it's the most important line of defense. I don't know that it's a threat in itself but you can defend every airport as much as you like. In the end the most efficient, safest borderline for security has got to be human intelligence. There seems to have been plenty of human intelligence in this case.

It seems that in an effort to shield the Obama administration from criticism--most notably his Homeland Security Secretary Janet Napolitano, who has been under pressure to resign after she initially (and puzzlingly) insisted that security measures worked as designed. Olbermann and Wolff attempt to divert the blame from security officials to intelligence officials.

This is hardly the first hint at conspiracy theory Olbermann has uttered on air. He came very close to suggesting that the Bush administration was complicit in the terrorist attacks of September 11, 2001. He seems quite willing to use attacks (successful and unsuccessful) on the United States for political purposes--to shield those who share his views and attack those who do not.
Foreign Policy War on Terrorism Conspiracy Theories Crime Anti-Military Bias Countdown Richard Wolff Janet Napolitano