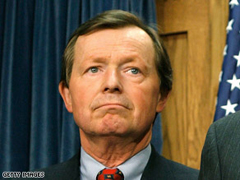 Very often criticism of journalists is actually criticism of journalism. Effective investigative reporting entails asking the tough questions and demanding answers.   Powerful Democrats, including White House officials, have derided Fox News for this reason. But even conservative bloggers are not immune to the "extension of the opposition" charge for simply asking the tough questions.

Late last month Congressman Earl Pomeroy, D-N.D., held a conference call on the administration's reform efforts. Pomeroy reiterated his support for the House health care bill. Rob Port, of the center-right blog SayAnythingBlog.com, asked a question during the Q and A period, in which he displayed open skepticism that the "public option" would increase consumer choice in the health care market (audio and transcript below the fold).

You're saying that public option would be competitive and that this legislation overall would overall create more competition in the health care market. And I'm a little skeptical, I'm looking at the bill, page 94 section 202 [inaudible], which would require individuals to purchase coverage through the federal government. I'm a little skeptical of legislation saying that it creates more competition when, (A) citizens are eventually going to be required to buy their policies be they the public option of private through the government and (B) the whole idea of the government competing with the private sector when the government is also the people who write the laws and make the rules...

Also present on the call was a blogger from NorthDecoder.com a politically charged site if there ever was one. In perusing their home page, one stumbles upon countless instances of liberal opinion. One blogger laments the "incoherent paranoia-fueled ramblings of Sarah Palin as she tried to regurgitate talking points beyond her comprehension." The blog celebrated (?) Tuesday's election results by proclaiming "a repudiation of everything the teabaggers stand for." Not exactly fair and balanced.

But Pomeroy's charge that Say Anything is "not an objective news organization" did not seem to extend to the conference call's liberal participants. That Pomeroy excused this imbalance by noting that the liberal blogger hadn't asked any questions only shows his complete aversion to criticism and debate--cornerstones of effective journalism.