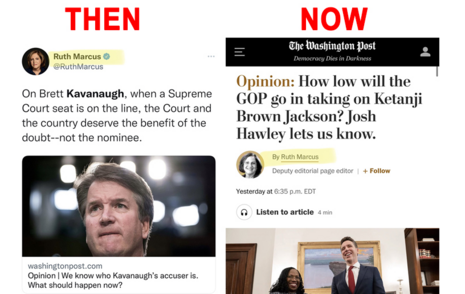 On Sunday, The Right Scoop’s Fred T. reported on a left-wing columnist and editorial page editor getting caught in stunning hypocrisy when it came to her treatment of Supreme Court nominees: “Washington Post’s Ruth Marcus says a SCOTUS seat is too important to do fact-checking or truthfulness. Except when she says the opposite. So just like everyone else in the media all the time.”

He highlighted: “But Ruthy not only got called out for it, she actually tried to explain it away. It’s kind of amazing.” The article featured side-by-side images of Post headlines from Marcus. The first, regarding the nomination of Brett Kavanaugh in 2018, denounced the idea that he receive “the benefit of the doubt.” The second headline, regarding Ketanji Brown Jackson’s current nomination, fretted: “How low will the GOP go in taking on Ketanji Brown Jackson?”

Read the full article at The Right Scoop.