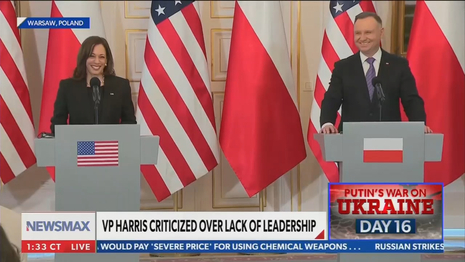 On Tuesday, Twitchy’s Brett T. reported on Reuters attempting to do a “fact-check” to defend Vice President Kamala Harris over her recent laughing fit when asked about the Ukrainian refugee crisis: “We didn’t need a Reuters fact-check about that video of Vice President Kamala Harris laughing awkwardly when asked a question about the Ukrainian refugee crisis — we’ve already been informed by ‘The View’ co-host Sunny Hostin that criticism of her inappropriate laughter is ‘based in racism’ and ‘that’s the truth of it.’”

He continued: “But now Reuters, several days later, is telling us that the clip was taken out of context.” Brett observed: “That’s a great start, but could Reuters now go back and fact-check every time Harris has broken into that signature cackle? It seems to happen a lot, like last summer when she was asked about visiting the border, so maybe that’s why people misinterpreted the video.” He highlighted Twitter reaction to Reuters trying to clean up the latest Harris gaffe.

Read the full article at Twitchy.