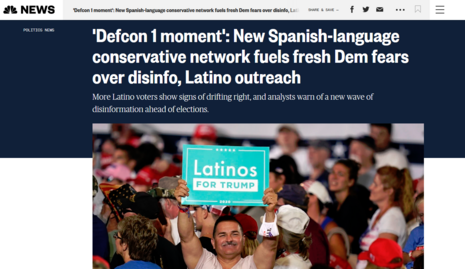 On Monday, Twitchy’s Sarah D. reported on NBC News losing its mind over a new conservative Spanish-language network with an absurd online article titled: “‘Defcon 1 moment’: New Spanish-language conservative network fuels fresh Dem fears over disinfo, Latino outreach.” The Twitchy article mocked: “Holy hell. Defcon 1 is the one you really don’t want to be at. Defcon 1 is, like, nuclear war. Is that where we’re at right now? Nuclear war? No…but we’re about as close as we can get to it.”

Sarah D. pointed out: “...the idea that ‘the disinformation problem’ is some kind of conservative media phenomenon is straight-up ludicrous and insane. According to the MSM, ‘disinformation’ is just another word for ‘information we don’t want people to read or hear about.’” She noted that “Dems are scared, and the media are scared,” before highlighting multiple Twitter users dunking on NBC’s panic.

Read the full article at Twitchy.