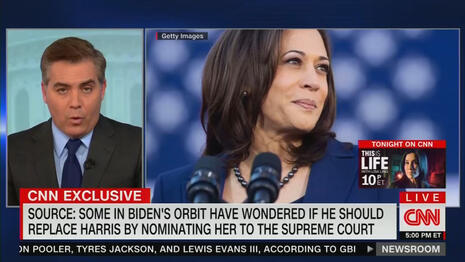 On Tuesday, The Federalist’s Senior Editor Mollie Hemingway threw cold water on CNN legal analyst Jeffrey Toobin’s absurd suggestion that Vice President Kamala Harris was on Joe Biden’s short list of potential Supreme Court nominees: “Toobin took a break from punishing his colleagues by toggling his joystick at work on a Zoom call to opine on who he thinks President Joe Biden might nominate to the Supreme Court in the event Associate Justice Stephen Breyer steps down at the end of the term.”

After displaying a Monday tweet in which Toobin offered the wild speculation, Hemingway continued: “The media and other Democrat Party activists are re-upping the campaign they ran last Supreme Court term to bully Breyer into retiring.” She explained the reason: “Because the Democrat Party’s policy failures at home and abroad have become so disastrous that not even the corrupt corporate media can cover them up anymore, the Republican Party has a chance to re-take control not just of the U.S. House, but also the U.S. Senate, which handles all presidential judicial nominations.”

Read the full article on The Federalist.